I’ve been live streaming various events for small organizations for a while. Most recently for the Against the Stream Meditation Center in SF (if you’re into mindfulness meditation and dharma talks check it out on Monday’s at 7:30pm PST).

Meditation centers don’t usually have a ton of money so we needed to figure out how to do things relatively cheaply. In the past I’ve used Ustream for other organizations, but they’re expensive. Especially for a non-profit.

Note: This assumes you want to do a relatively professional looking stream. If you’re just looking to stream you playing a video game or something there are even cheaper ways to do it. This article doesn’t cover that though. (although YouTube is still a great choice for that)

Looking around for alternatives I discovered that YouTube now does live streaming. For free. I’m usually skeptical of free offerings but they have been fantastic. Quality, analytics, control have all been on par with what I’m used to with Ustream, if not better. If you want to put up paid content then Ustream has some advantages but it’s very expensive. If you’re just trying to live stream your user group, meditation, or whatever meeting then I highly recommend taking a look at YouTube. (in YouTube go to Video Manager and then select Live Streaming. See image below)

So that takes care of one big component, the delivery network. YouTube: FREE  (YouTube records everything and then posts it after you’re done. If you’re doing test streams, make sure you turn that function off. Had an mildly embarrassing test video get posted accidentally) 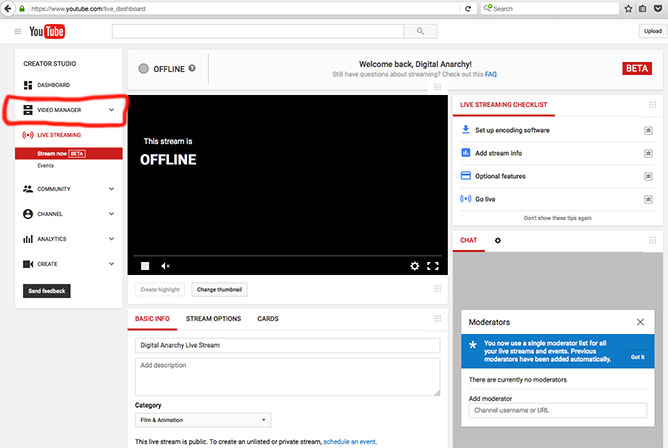 Currently I use Wirecast Studio. This is great software for streaming productions. You can have overlays, animated lower thirds, multiple cameras, multiple audio streams, etc. It’s really a great live production environment and works with virtually every CDN (content delivery network). It’s also $500. If you’re doing a serious production it’s worth it though.

HOWEVER, with YouTube you can get Wirecast Play for free. Yep, once again FREE. This is a bit more limited, you can only have one camera (which is just fine for most small events), there’s no preview (whatever you select immediately goes live) and it only works with YouTube. However, if you’re only streaming on YouTube… not really a problem. It’s FREE and does have many of the features of it’s big, $500 brother. It also only works with Black Magic capture cards, so that’s another potential big limitation of Play. (see further down for the hardware I recommend)

So, software: FREE  (you can buy Wirecast Play Studio for $279. This is the $500 app restricted to YouTube. If you can afford it, I highly recommend this. The ability to Preview is kind of a big deal. But play with the free version and see how that works for you.) A screenshot of Wirecast Studio is below. As you can see below it looks much like a normal video editing app, so it’s very intuitive. (and yes, if they ever allow plugins we’d love to port Beauty Box Video to it :-)

And now we get to Hardware. Hardware is not usually free unfortunately. So this is where the expenses come in. However you’ll see it won’t be too bad, other than maybe the computer.

You’ll need a computer. I sort of recommend MacBook Pros

. Macs still handle audio/video stuff with less problems than their PC counterparts. Apple unfortunately isn’t very generous with the hardware though, so small disks and limited RAM can create bottlenecks. If you don’t need the machine to be portable and can use a desktop machine, you’re better off. If you’re pretty tech savvy, then a PC is fine. Just realize they can be more finicky when it comes to getting video in. (although Windows is getting better)

I’ll go over various problems with the software and hardware in part 2 of this. There are lots of quirks to getting video into a computer and getting it to spit it out to the interwebs, so it needs it’s own blog post. The MacBook Pro

has less quirks, so that’s the machine of choice for me.

Internet Connection: You have to have pretty fast internet (bare minimum is 1megabit Upload speed) and expect to use a wired connection. Do NOT use Wifi. Wifi is relatively unstable, slower and you’re much more likely to have problems. Run a cable directly into your modem or router. It will definitely help if other people are not using the connection. Having someone start watching Netflix while you’re trying to stream will not go well.

Having your connection constantly dropping really sucks and makes for a lot of stress. Get a fast connection, wire straight from your modem to the computer and kick everyone else off the line. Much more likely to have a good stream for your viewers and less stress for you.

Internet Connection: $50/mo (give or take)

: This is what I use. It works well with the Mac but requires Thunderbolt. It took a bit of time to get it set up and find the right setting to get it to work with the Panasonic camcorder

I use.  From my experience and most accounts, it’s very finicky. Expect to spend some time setting it up and possibly calling Black Magic (who were very helpful and got me up and running but other folks have reported having less positive experiences).

Frankly there aren’t a lot of other good, inexpensive solutions. So even though it’s not perfect, once you get it set up, it does work and will only set you back about $230. There’s also a USB 3.0 version

which I have not tried.

but any camcorder with a HDMI port will work. I know the correct settings on the Black Magic Intensity (1080i59.94) that goes with the Panasonics (video quality: 1080HG) so that’s what I stick with. But with a little experimentation I’m sure you can figure out the settings for any HD camcorder with HDMI out.

but that’s just cuz I’m a geek. It’s a great camera and certainly works well, but total overkill if all you’re doing is streaming. Just get a basic HD camcorder.

Microphone: If you’re doing this on the cheap, just use the camcorder microphone. Easy and usually sounds ok. I’ll probably do another blog post on audio. There are lots of options and not easily covered in a couple paragraphs. Using the Camcorder Mic will be Free and easy. It won’t sound _amazing_ but should work. One advantage of the on camera mic is that it’s great for picking up the audience. Even if I have the speaker mic’d up, I’ll switch to the camcorder mic if someone in the audience is speaking (if there’s no audience mic). (This is one instance where Wirecast Studio is preferable to Wirecast Play)

or two. Buy them from Amazon, they’re cheap and work great. Cost: $20-30 or so. Make sure you figure out what length you need. You may not be next to the modem so a long ethernet cable may be necessary. The longest HDMI cable I’ve been able to use is 12 feet. Seems cameras don’t have as strong of a HDMI signal as TVs and can’t use very long cables. Make sure you test everything well in advance of your event.

Actually, let me say that again: Make sure you test everything well in advance of your event. Streaming is quirky and you need to have confidence all you components and cables will play nicely together.

So the bottom line is. assuming you have the computer and a decent internet connection:

4 thoughts on “Live Video Streaming on the Cheap”