Update: For Premiere 14.3.2 and above New World is working pretty well at this point.  Adobe has fixed various bugs with it and things are working as they better.

However, we’re still recommending people keep it off if they can. On long transcripts ( over 90 minutes or so) New World usually does cause performance problems. But if having it off causes any problems, you can turn it on and Transcriptive should work fine. It just might be a little slow on long transcripts.

If you’re using Transcriptive v1.5.2, please see this blog post for instructions on turning it off manually.

For the most part Transcriptive, our plugin for transcribing in Premiere, is written in Javascript. This relies on Premiere’s ability to process and run that code. In Premiere 14.0.x, Adobe has quietly replaced the very old Extendscript interpreter with a more modern Javascript engine (It’s called ‘NewWorld’ in Adobe parlance and you can read more about it and some of the tech-y details on the Adobe Developer Blog). On the whole, this is a good thing.

As with most new systems, Adobe fixes a bunch of stuff and breaks a few new things. So we’re hoping over the next couple months they work all the kinks out and it all sorts itself out.

There is no downside to turning New World off at this point. Both the old and new Javascript engines are in Premiere, so it’s not a big deal as of now. Eventually they will remove the old one, but we’re not expecting that to happen any time soon.

As always, we will keep you updated.

Fwiw, here’s what you’ll see in Transcriptive if you open it with New World turned on: 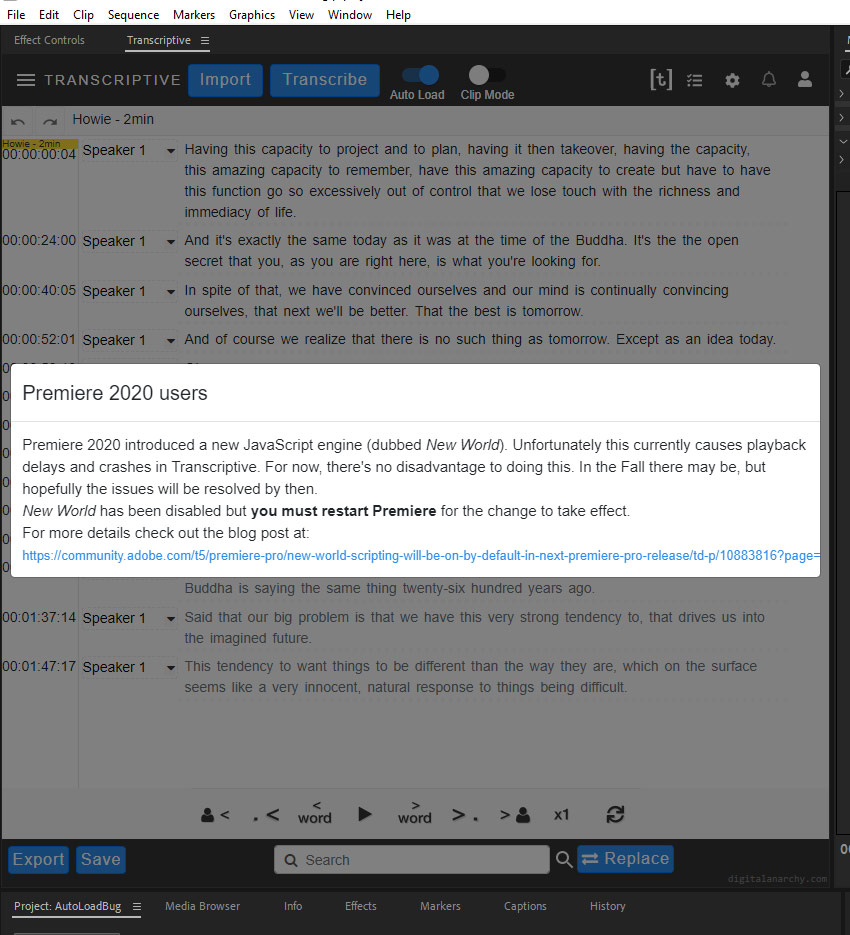 That message can only be closed by restarting Premiere. If New World is on, Transcriptive isn’t usable. So you _must_ restart.

What we’re doing in the background is setting a flag to off. You can see this by pulling up the Debug Console in Premiere. Use Command+F12 (mac) or Control+F12 (windows) to bring up the console and choose Debug Database from the hamburger menu. 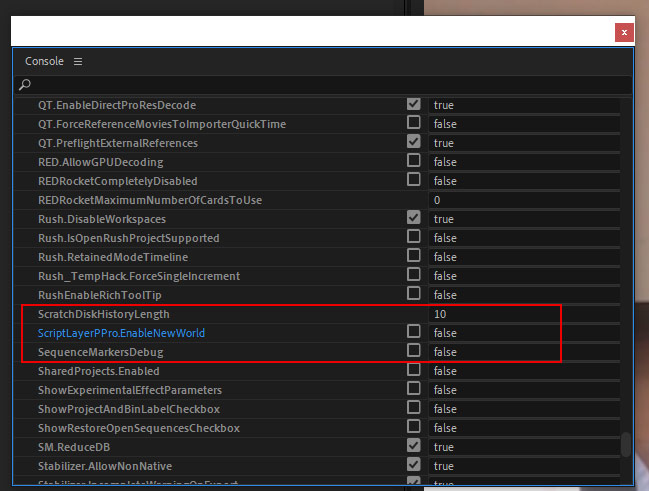 If you want to turn it back on at some point, this is where you’ll find it. However, as mentioned, there’s no disadvantage to having it off and if you have it on, Transcriptive won’t run.

If you have any questions, please reach out to us at cs@nulldigitalanarchy.com.