First off, the important bit: All the current versions of our plugins are updated for El Capitan and should be working, regardless of host application (After Effects, Premiere Pro, Final Cut Pro, Davinci Resolve, etc). So you can go to our demo page:

And download the most recent version of your plugins.

If you haven’t upgraded to El Capitan, I’ll add to the chorus of people saying… Don’t. Overall we’re disappointed by Apple as continues its march towards making the Mac work like the iPhone. Making professional uses more and more obsolete. They’re trying way too hard to make the machines idiot proof and in the process dumbing down what can be done with it.

One of the latest examples is, of all things, Disk Utility. You can no longer make a RAID using it and have to use a terminal command. They’ve removed other functionality as well, but for many professional users RAIDs are essential as is Disk Utility. However, it’s now been crippled.

Of course, then there’s Final Cut Pro (which has gotten better but still doesn’t feel like a professional app to many people), Photos which replaced Apple’s pro app Aperture, and the Mac Pro trashcan. (kind of sad that when we need a ‘new’ Mac, usually we buy a 2010-12 12-core Mac Pro, they outperform our D500 trashcan)

Apple isn’t alone in this ‘dumbing down’ trend. Just look at latest releases of Acrobat (which I’ve heard referred to as the Fischer Price version) and Lightroom.

Note to Application Developers- Just because we’re doing a lot of things with our phones does not mean we want to do everything on them or have our desktop apps work like phone apps. There’s a difference between simplicity, making the user experience clear and intuitive but retaining features that make the apps powerful, and stupidity, i.e. making the apps idiot proof.

Anyways, end of rant… I spend a fair amount of time thinking about software usability, since we have to strike that balance between ease of use and power with our own video plugins, and using the host applications and OS professionally. So this ‘dumbing down’ concerns me both for my personal uses and having to help DA customers navigate new ‘features’ that affect our photo and video plugins.

Around the holidays, we received a great compliment about Beauty Box from customer Ross Webb. Beauty Box is our new skin retouching software for video footage in After Effects and Final Cut Pro.

I asked Ross about his work. He said, “My history is around AE but I’m using FCP for this. The footage is owned by me, shot on a canon 7D. It’s glamour and the model had really bad scarring on her face.”

Thanks Ross. We wish great success to your project. And continued success to our skin smoothing product, for which you can see examples here.

And we’re back. Digital Anarchy is once again making plugins for After Effects and Final Cut Pro. Our first new product is Beauty Box 1.0, which was released yesterday. In a nutshell, this plugin automatically does skin retouching, which reduces wrinkles and removes blemishes.

If you weren’t able to hire a makeup artists for your shoot, or you just have regular people who look, well… regular, then Beauty Box allows you to do skin retouching without having to go frame by frame. It’s a powerful new plugin that uses face detection and an advanced smoothing algorithms to smooth out the skin while keeping all the other details sharp and in focus.

Of course, we have the privilege of working with beautiful models. But Beauty Box will make everyone look beautiful! Ok, well, maybe not everyone. But if it’s possible, Beauty Box makes it easier to get them there.

END_OF_DOCUMENT_TOKEN_TO_BE_REPLACED

Something that is interesting about doing our customer support is seeing the purchasing patterns. Each week seems to have a different theme in terms of products that are bought and requests that are sent

For instance, two weeks ago, the big sellers were 3D Assistants and Psunami Water. It was water, water, water all week long and everyone needed it yesterday, as if they were gasping for liquid. I have a feeling that the two factors working here were a writeup in Layers magazine about 3D Assistants, and a tutorial on the fabulous Digital Media Net by Kevin P McAuliffe.

Kevin has been a friend of Digital Anarchy for awhile and we always enjoy his articles, even when they’re not about us. :-) You can read the Psunami tutorials here on Audioproducer.com I’m trying to locate the Layers magazine article by Rod Harlan. That’s one of our favorite publications and I know it’s _somewhere_ around the office.

END_OF_DOCUMENT_TOKEN_TO_BE_REPLACED

This gadget came to my attention and I had to buy one. It’s the Jakks EyeClops Bionic Eye. 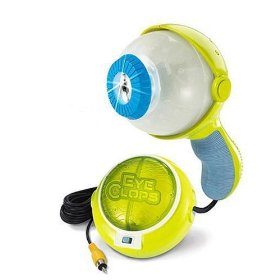 For $40 (from Amazon) you get an SD resolution macro video camera. If you’re fascinated by things that can only be seem with a high level of magnification this is great. The quality isn’t fantastic, but it’s good, especially considering it’s $40. It outputs via a standard (RCA) SD cable, so you should be able to capture the results.

A worthwhile toy for the video geek on your list…

Now that Avid has pulled out from NAB and won’t be exhibiting in 2008, here have been a lot of users and other folks wondering what it means and what the industry thinks of it. the immediate reaction of the entire industry was to exclaim, “No shit?” and 2.3 seconds later, after the full import of what that meant hit them, was to call their NAB sales rep and promise all manner of favors if they could move their booth to front and center of the show floor.

Since I’m hardly above such things (”I was young and poor and needed the booth space”), I joined in, attempting to move our Plugin Pavilion into the now vacant space of the Avid Developer Community booth. I even had the person from Avid that managed the ADC to call NAB on our behalf. All that got me was a terse email from our NAB rep saying we would definitely NOT be getting it. It’s the new sport in HD, groveling for Avid’s booth space. Look for it on the LVCC cafeteria monitors (instead of the usual strip club ads).