There’s a myth going around that DSLRs shoot great video footage. They don’t. They are not video cameras and as such, usually result in sub-par video. If you want to shoot video, go buy a video camera. Stop listening to the cool kids telling you to shoot video on your non-video camera DSLR.

For the types of stuff most people are shooting on DSLRs, a sub-$2000 video camera, like the Canon XA10, will probably serve them much better. Actually, $800 handhelds are often more than most people need. I’ve got a Panasonic that shoots absolutely beautiful HD. I know, I know… it’s not as cool, but for most things, even stuff that Pro Video guys shoot, you need to jump through hoops to get a DSLR to do what you want. For example, it’s doubtful I’d let someone with a DSLR rig shoot my wedding. IMHO it’s not the appropriate camera for the job. Most people using a DSLR to shoot a wedding are probably trying waaaay too hard to be a ‘filmmaker’ and probably not as focused on just shooting my wedding. Besides, I really don’t want someone wearing a rig that looks like an orthodontic headset for Frankenstein wandering around my wedding. 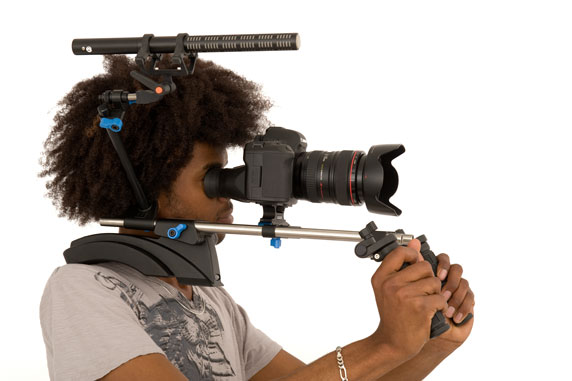 Using a DSLR to shoot video is sometimes an endeavor worthy of Dr. Frankenstein.

(Of course, if you’re into creating a monster, the RedRock DSLR rig shown is a good one)

All that said… it is possible to get great footage out of a DSLR and you get to use all those super awesome lenses. The gist of this post is to get you thinking about the hype that surrounds DSLRs and video. The cameras have a LOT of shortcomings that most people are going to find difficult to workaround, even video pros that are used to higher end camcorders. Before you go running off trying to use a DSLR for video, consider what you’re shooting and what you want to achieve. Examine the features that DSLRs are lacking, how that will affect what you’re shooting, and what you will have to buy to compensate for the missing video features. Use that as a guide to determine whether you should spend the time and money on outfitting your DSLR to shoot video or just buying a video camera that’s designed for video from the ground up.