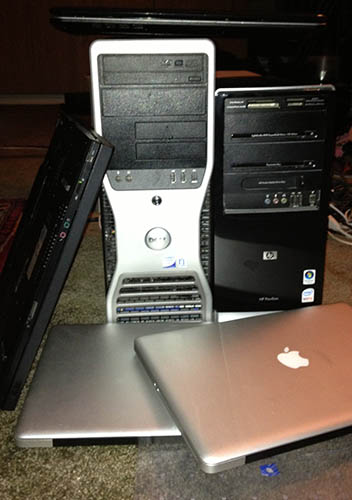 So you’ve got two (or 20) computers and you want to use Beauty Box (or whatever) on all of them.

This is always a tricky thing for software developers. On one hand we realize many folks have multiple machines and since they’re only one person, they can only use one machine at a time. We would like to allow them the flexibility of having it on a couple machines. On the other hand, if you’re a studio with multiple machines and multiple people we think that if our software is good enough to be installed and used on all those machines we should be paid for it. Making sure that happens sometimes gets in the way of how a single user is using our plugins.

When you buy a license of our software, you’re buying it for one user. If you’re a company with multiple machines and multiple artists/editors using those machines, then there’s not much gray area and you need a license for each computer being used. We offer pretty good volume discounts and site licenses for this type of situation, you can contact sales@nulldigitalanarchy.com for pricing.

There is one big exception to this… if you’re using After Effects’ network rendering. You do not need extra licenses for After Effects render nodes. You can install Beauty Box on as many render nodes as you want for free.

People (and, no, companies are not people. I don’t care what the Dread Pirate Roberts says)

If you’re just one person with multiple machines then there’s some gray areas. The software can be installed on a couple machines, but we use the internet to determine if the plugin is being used on multiple computers at the same time. So if you have a desktop and a laptop and you’re using one or the other depending on whether you’re at home or at the office, no problem. You’re good to go.

However, if you’re in your studio/office and trying to use both machines for rendering/editing at the same time, you may run into problems. If so, here’s what you can do:

2)      Use the second machine as an After Effects render node. As mentioned above, you can use Beauty Box on as many render nodes as you want for free. So if the machine is just being used to process frames sent to it from another machine you shouldn’t have any problems.

3)      Our licensing is set up so that you can install on two machines, they just can’t be in use simultaneously.  The way we check this is via the internet. So if you disable the internet connection on one machine, then we can’t check it. This is a hack and technically violates the license. However, since the spirit of the license is for one user, as long as it’s the same person using the machines we’re ok with it.

Like most of you, we’re running a small company. We try to be as flexible as possible, but if you’re making money using our software we would like you to buy the correct number of licenses. Please support the companies that make the tools you use and that help you be successful.