My biggest frustration with the 5D is the lack of AutoFocus.

You get very use to AF on traditional camcorders and not having really affects how you shoot. You definitely can’t move around as much as you would with a normal camcorder. It is possible to hit the AF-ON button and get it to re-focus, but this is quite a bit different than dynamic, I-don’t-have-to-think-about-it Autofocus. 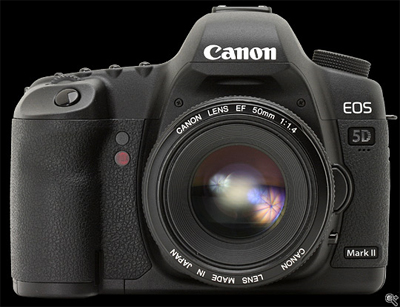 So it has it’s shortcomings, but this is partially made up for by the absolutely beautiful video.  So my top 10 observations about it…

2. No AutoFocus. Biggest downer and limits the types of shooting you can do.

3. Being able to manually set aperture and shutter speed is awesome. This requires the camera firmware upgrade. But it really adds a new dimension to the videography capabilities.

4.The ability to changes lens, especially to a nice, big aperture lens, is very cool. However, this is offset by the AF issue. When you have really shallow depth of field it’s difficult (and sometimes impossible) to keep things in focus.

6. Being able to shoot images while you’re shooting video is a great workflow thing. You don’t have to switch modes to get a still shot.

7. The quality is impressive, given the amount of compression. Shooting uninterrupted for 12 minutes is great and somewhat surprising considering the quality.

8. No tapes! Hooray for solid state!

9. No tapes! part 2: copying the Quicktime movie off of the compact flash card is sooo much easier than digitizing tapes.

10. It’s awkward shooting with a mic on top of the camera. Again, this is really not a camera that’s designed to shoot video while moving around. Lock it down though, and you’ve got one hell of a video camera.

2 thoughts on “Shooting video with the 5D Mark II”