Releasing new products is awesome, but to me, the best part of working for a video/photo plugin company is to see how our clients are using our products day-to-day. From transcription to flicker removal and skin retouching, content creators all over the world are using plugins to create better content and images. There are so many talented content creators making cool stuff out there!

This week we talked to Margarita Monet, lead singer of Edge of Paradise. The band — Dave Bates-guitars, David Ruiz – guitars, Vanya Kapetanovic – bass, and Jimmy Lee – drums — has been taking advantage of visual effects to enrich their music and create unique videos. In this interview, Margarita discusses how visual effects are helping to shape Edge of Paradise’s identity and explains how she has been using Beauty Box Video to improve the image quality of her videos. 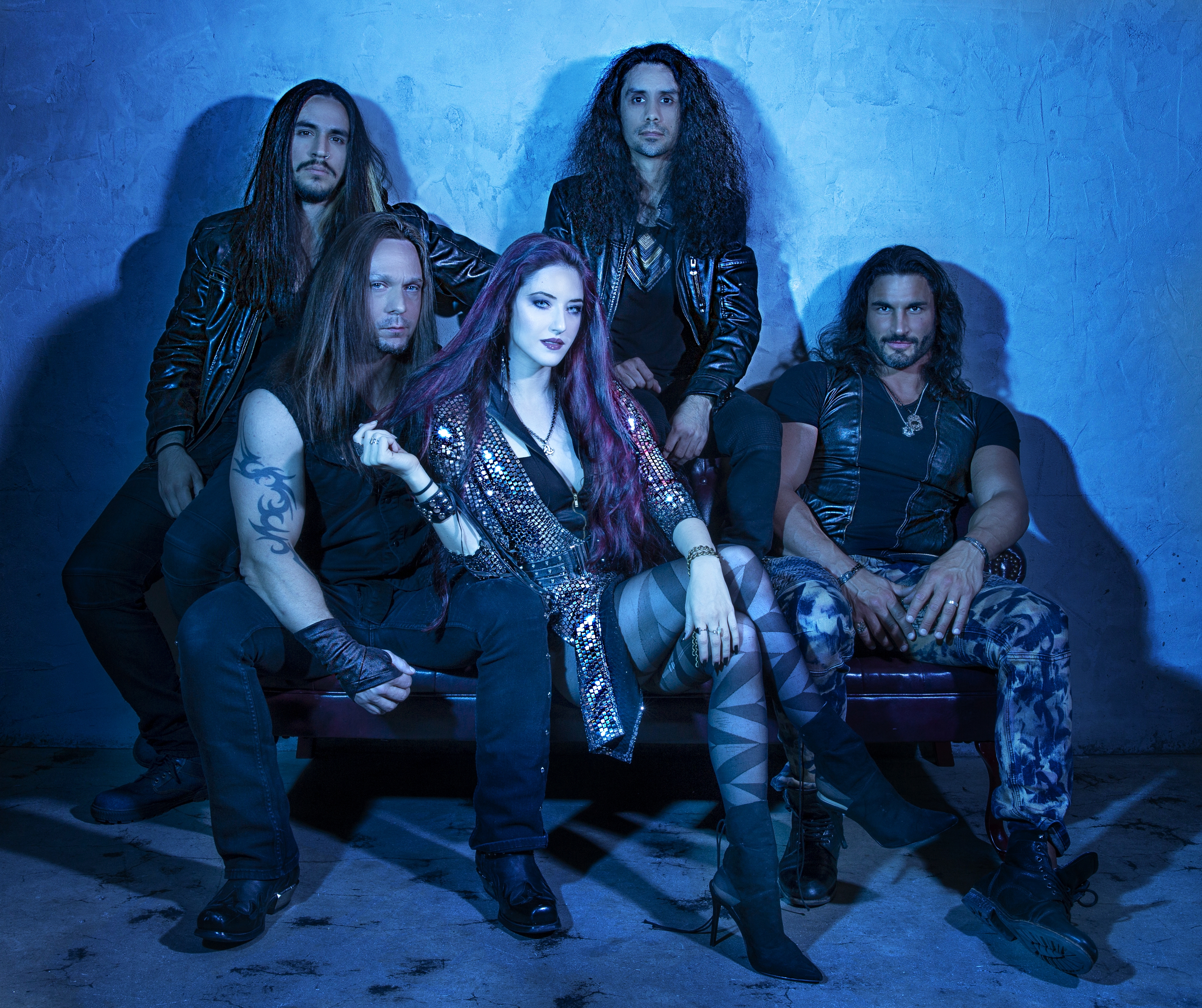 Digital Anarchy:  How would you describe the Edge of Paradise music and style?

Monet: Our music has evolved over the years. I would say we started with traditional hard rock and heavy metal, influenced by the classic bands like Black Sabbath and Iron Maiden. But our music evolved into something more of a cinematic hard rock with an industrial edge. I incorporated the piano and keyboard which gave some songs a symphonic feel to them. Our music is very dynamic, with blood pumping drums, epic choruses all moved by heavy guitar riffs. But we also have very melodic and dynamic piano ballads. The upcoming album Universe really showcases what Edge Of Paradise is all about, and we are so excited to share this unique sound we created!

Digital Anarchy: Since the very beginning, your music videos have been full of visual effects. Where do all the VFX ideas come from? Are they mostly done in post-production?

Monet: Most of the visual effects we actually tried to capture on camera and enhance it in post. Except for one of the Lyric Videos ( Dust To Dust ) that was all done in After Effects.

Usually, ideas came from me, and whoever we were working with helped us bring them to life. We’ve had to get very creative playing with light, with props, building the settings.  And as the band grows our videos get more and more elaborate and we all get more creative. We recently released a music video we shot in Iceland (Face of Fear), that one was directed by Val Rassi and edited by Robyn August. No visual effects there, just all scenery captured by an amazing drone pilot Darren LaFreniere!

Digital Anarchy: How long does it usually take to produce your videos? Is the whole band always involved in each stage of production?

Monet: Depends on the video. Some take about a month, where I come up with an idea and location/setting and we shoot it. Some videos take longer with a lot of planning and it’s a group effort. And there is always something we have to do in between, whether it’s playing shows or touring. Filming usually is a 1-2 day shoot, and we allow about 1-2 months for editing to be done.

We plan as much as possible and try to create beautiful shots for each take. However, things don’t always go as planned or we can’t achieve the perfect look we want. That’s when visual effects come handy. Recently we shot a live video of an acoustic version of one of our songs. It was shot in a recording studio and we had some limitation with lighting. I was searching for something I could do to polish up the look and came across Digital Anarchy. When using 4K cameras, it creates a very high-quality image, and all the details are visible, so we decided to try Beauty Box video. It is such a great tool to polish up the look! Extremely effective and time efficient.

Digital Anarchy: How is Beauty Box helping you to achieve the look you want on your music videos?

Monet: We put so much effort into creating the settings and the “world” of the video that it’s only expected to have everything look polished and coherent. Sometimes we might have this great shot, but one of our faces looks shiny, or the light is not completely flattering. Beauty Box can fix those issues and allow us to use the shot we want!

Digital Anarchy: What was your first music video as a band and what do you think has changed so far?

Monet: Our first video was Mask, it sounds and looks like a completely different band. We had to start somewhere. It’s a well-done video, we’ve had probably the largest crew working on that to date, over 10 people, and we learned a lot from it! It was also a different lineup, so the band was still evolving. But it does not even come close to what we look and sound like now!

Digital Anarchy: Would you say the visual effects applied to photos and videos nowadays are part of the band’s identity?

Monet: Yes, we want to transport people to another world, and we want to do that in our live show as well. That is why we are building our stage show to reflect the imagery of the band when we start touring in support of the upcoming album Universe. Our vision from the beginning was always larger than life so I would say it’s a part of our identity.

I want our content to make a big impact visually. We put so much time and effort into our songs to make sure all our music, from songwriting to production, is the best it can be. We have to do the same with video! And now we can put more time and effort into creating videos that tell great stories; that are visually stunning and are of the highest quality. That is essential to keeping the band growing.

I think the fact that we do have quite a few videos, not just music videos, but promo videos as well, helped us keep building momentum. Especially today, people expect that from you. Being a newer band, especially in the beginning, it was a big challenge and I didn’t know much about video creation, so I had to learn very fast.

Digital Anarchy: Every member of the band is somehow connected to other art forms besides music. How do you think this impacts the aesthetics of the band now?

Monet: I think these days, being in a band is not just about making music, we must create a world that people will want to be a part of. And I love that, I love the visual aspect of it, I love creating a stage show, creating music videos. I make a lot of graphics and art for the band as well, and in a way that helps me with the songwriting, because I can really visualize the world I’m creating. We have a great collection of people, all their skills and ideas come into play when we evolve our world!

Digital Anarchy: After producing and editing so many music videos, what is your favorite visual effect?

Monet: The last video we worked on with Nick Peterson, he created a really cool effect where he filmed us at different playback speeds/frame rates that gave certain parts of the video more of a static/robotic feel, some parts are smooth, slow motion. It created a really cool effect and gave the video the right dynamics and motion that flows right with the song. Some other effects in the past that I liked was playing with light flares and earthquake effect is also great for music videos!

Dave, I, and the rest of the band members are very hands-on nowadays.  We have a smaller 2-5 people crew, which helps everything run smoother and more efficient. Most of the time we have 1 or 2 days to shoot and as the videos get more elaborate, we must work fast and get very creative. The last video we shot with Nick Peterson (Universe) we captured so much in 1 day. It’s great to work with people who understand how to maximize the time to capture what we need to achieve the vision!

The trainer for Universe is not yet ready, but here is a sneak peek!

With a solid line-up, Edge of Paradise is working on new music videos and getting ready to release their new Album, Universe. Check their website to learn more!

Are you a content creator using Digital Anarchy plugins to produce video materials? Get in touch! We would love to learn more about your work and spread the word.