I’ve written about this before, but Thanksgiving came along this year and I left on a 5 day, two city trip without my Wacom tablet. Which reminded me exactly why I’m thankful for the tablet.

The downside to running Digital Anarchy is that I don’t really get many  days off. Usually I’m working in some capacity at least a couple hours a day even on vacations. For trips (like Thanksgiving) that involve plane flights and other downtime, it’s usually a lot more than two hours. (Not really complaining, just pointing out that it’s a thing. There’s plenty of awesome stuff about being Chief Executive Anarchist and coming up with cool video plugins for y’all)

I’ve used a Wacom tablet as a mouse replacement since around 2003. I used to run a user group called Bay Area Motion Graphics. Because I and one other DA employee had RSI problems, I got a variety of ‘ergonomic’ devices and had DA folks and members of BAMG try them out. BAMG was mostly video editors and motion graphic artists, to give you some idea of who was using them. 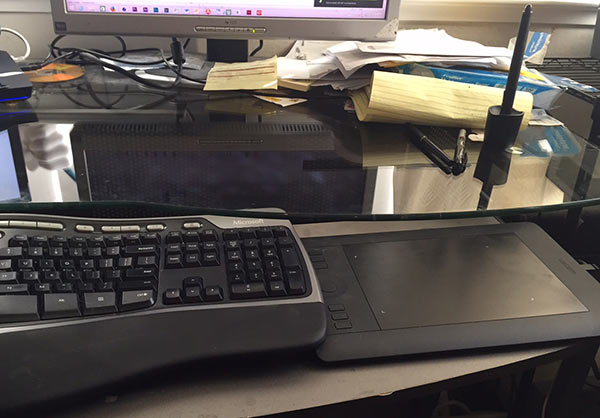 Extra space on your keyboard drawer, yes. Clean desk, no.

We swapped around the weird looking keyboards, joystick mouse things, trackballs, tablets, and other oddments. We then got together and decided which devices seemed to offer relief to the most people.

One of the devices that stood out, especially for me, was the Wacom tablet. Once you get used to using it as a mouse replacement it’s really an awesome device. I have multiple tablets and use them constantly in the office and while traveling. It makes using the computer much less painful.

That’s in stark contrast to the last few days. No tablet, so I’ve been forced to use the track pad on the two computers I carry around. My wrists immediately started to ache and tingle. Not good. It’s amazing that for the most part I have no problems when using the tablets, but then after a couple days not using them, much of the pain comes back. Of course, RSI  is a whole body thing. Not only do your wrists hurt, but you’re in a less ergonomic position (f’ing hotel chairs) so my shoulders and back hurt as well.

Why are the Wacom tablets so effective for helping with RSI? I’m not sure to be honest. But I feel that 1) you’re holding the pen as you would a normal pen. This is a skill you’ve been working on since you were a small child and the muscle memory is very strong. 2) you’re not just using one body part over and over again (like your index finger on a mouse). You’re using your whole hand, wrist and arm. I feel like this distributes the stress over a greater area.

Whatever the case, for me, the tablets have been a godsend. It takes some time to get really familiar with them, but it’s been well worth it for me. Of course, it’s just one part of having an ergonomic workstation but it’s a big one (a great chair is another big one). Your health is critical. Take care of yourself.