All the speed tests we’ve done with Beauty Box on Windows show the Nvidia GeForce video cards to outpace their much more expensive cousins, the Quadros, significantly. A GTX 570 (~$270)

Since Beauty Box can involve some render time, we’ve wished that Apple would authorize one of the newer GeForce cards for the Mac. No such luck. So we’re tired of waiting. We took a stock PNY GeForce 570 and put it into our MacPro. And lo! It works!

So… what’d we do and what are the caveats? This was not a 570 with ‘flashed’ ROM. This was just a straight up 570 which we use in one of our PC machines. Nothing fancy. We did need to download a few things:

– Latest Nvidia driver for the Mac, which can be found here: http://www.nvidia.com/object/macosx-304.00.05f02-driver.html

– Latest CUDA drivers for the Mac, which can be found here: http://www.nvidia.com/object/mac-driver-archive.html (as of this writing, v5.0.37 was the latest)

– If you’re using Premiere you need to update the cuda_supported_cards.txt file to add the name of the video card. In this case it would be: ‘GeForce GTX 570’  To do this, you need to go to the Premiere.app file, right+click on it and select ‘Show Package Contents’. Once you do that, this is what you’ll see: 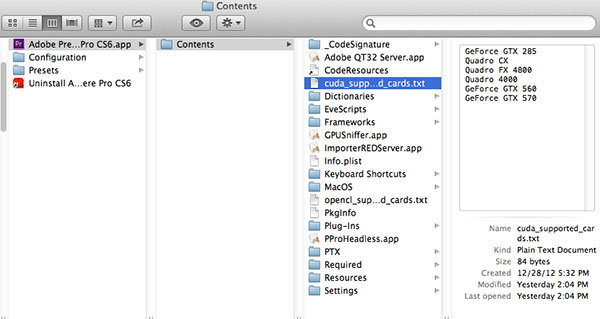 Once that’s done, you are good to go!

– It does not appear to be as fast on the Mac as it is on the PC. It’s about as fast as the Quadro 4000 or ATI 5770 on the Mac, but not faster. And in some cases it’s a bit slower. Then again, it’s also 1/4th the price. Most of the speed testing was done around Beauty Box, so this is probably not representative of After Effects 3D rendering or the Premiere Mercury Engine. Beauty Box uses OpenCL which ATI and Nvidia support. AE and Premiere use Nvidia’s CUDA, so replacing an ATI board with the 570 should give you a big boost.

– FCP didn’t seem to like the card and was sluggish. Again, we didn’t do a ton of non Beauty Box testing, and I’d like to do some additional FCP-only testing. But as it stands, if you’re not using Adobe products, I wouldn’t recommend the 570.

– You’ll need two 6 pin PCI-E cables. I _think_ the MacPro comes with these, but you’ll need to check. If you need to purchase a cable, get the 6+2 PCI-E cable if you can find one. Many of the newer cards require a 6pin cable and an 8 pin cable. You won’t need it for the 570, but you may need it if you eventually upgrade to another card. The GTX 690 requires two 8 pin cables. Crazy.

– We didn’t see any crashes or other problems with the card. However, we have heard of reports of problems by some folks who’ve done this. I highly recommend having an officially supported video card lying around in case you’re in the middle of a project and all of a sudden things start crashing. We did try a GTX 560ti which was causing crashes all over the place. So have your original video card around just in case. This is technically a hack after all.

– Not all Nvidia cards will work. As just noted, the GTX 560ti we put in the same machine caused massive problems in both After Effects and Premiere. I definitely would NOT try this with a GTX 690. Premiere has problems with the multiple GPUs that card has even on Windows where it’s officially supported.

– As mentioned, you do not appear to need a card with ‘Flashed’ ROM. Ours was just a stock 570. This is consistent with other reports I’ve seen.

Anyways, bottom line though is that the GTX 570

6 thoughts on “Nvidia GeForce GTX 570 in a Macintosh”