Digital Anarchy — that’s me and Jim Tierney — attended the Microsoft Pro Photo Summit this week. It’s a pro-level gathering that we have attended for three years, since the summit’s inception. I’m usually in contact with photographers about limited topics, like how to choose a chromakey screen or problems installing our software, so it’s refreshing to get a macro view of hot topics in the professional world of photography. 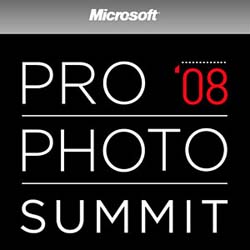 Speaking of ‘macro’, the two main topics of the Summit this year dealt with orphaned works and its related topic of internet image piracy, and competing with low-cost ‘micro’ stock sites (mainly www.istock.com). The topic of stock photography was especially succulent since not 24 hrs earlier, Getty Images and Flickr announced a deal of limited reciprocation.

Flickr on Tuesday entered a partnership with Getty Images to offer its users a way to potentially make money off their photography. The Yahoo-owned photo-hosting community will be a new resource for Getty, which can now contact Flickr members directly through the site and ask them if they want to share one or more of their images for use in a special Flickr-branded Getty collection. Flickr members interested in getting their images featured in the special Getty gallery will have to simply wait to be contacted. Otherwise, Getty and Flickr are encouraging aspiring photographers to post their content on the Getty-owned iStockphoto, which also happens to have been a hotbed for Flickr photos in the past.

This announcement played nicely into a push button topic at the MS PP Summit. This was ‘macro’ vs ‘micro’ stock imagery, or how there is a wall coming down — if it’s not already down — between pro and amateur photographers. Brings everyone’s price point down and thus their profits too. If you’re not familiar with the differences between macro stock and micro stock, this exchange on the DP Challenge forum has some good opinions and a comparison.

In my opinion, stock images have always been too expensive. Totally understand that there’s a food chain of folks who need to make money from the sale. But i remember from my print design days how many of the companies i worked for simply couldn’t afford the cost of a stock image for their brochure run. Instead, I’d get the nicely paid task of designing a vector graphic for the cover. Stock images seemed a little elitist although granted, my experience was mostly before the days of multi-tiered pricing for different resolutions. Now that photography is more accessible, as with all other disciplines and mediums, it feels like professionals need to come up with a new set of expectations or, somewhat uncomfortably, not have any at all for awhile.

Along these lines, there was an interesting talk given by a photographer named Leo Lesko. His topic was ‘Let the Pirates Have Their Way’, or how to combat image piracy by turning image grabbing into something positive. He suggested posting some of your good photos for free. Your work may be used illegally by some people, but potential customers will also find your images and contact you about using them commercially. It’s a positive spin on the pitfalls of ‘fair use’ and ties in (for me) to the concept of embracing and exploring new business models and marketing ideas. Here’s a related article by Leo Lesko on the Digital Photo Pro website.