For NAB this year we finally bought into the 4K hype and decided to have one of our demo screens be a 4K model, showing off Beauty Box Video and Flicker Free in glorious 4K. 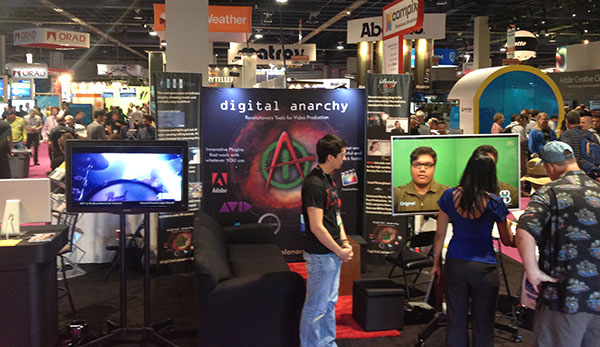 to do the honors. We quickly realized if we wanted to use it for doing live demos we would need a 4K monitor as well. (We could have just shown the demo reel on it) For live demos you need to mirror the computer monitor onto the TV. An HD monitor upscaled on the 4K TV looked awful, so a 4K monitor it was (we got a Samsung 28″

Our plan was to use our Mac Pro

for this demo station. We wanted to show off the plugins in Adobe’s AE/Premiere apps and Apple’s Final Cut Pro. Certainly our $4000 middle of the line Mac Pro with two AMD D500s could drive two 4K screens. Right?

We were a bit dismayed to discover that it would drive the screens at the cost of slowing the machine down to unusable. Not good.

. The price/performance ratio is just amazing. So we figured we’d plug the two 4K screens into our generic $900 Costco PC that had the GTX 980 in it and see what kind of performance we’d get out of it.

Not only did the 980 drive the monitors, it still ran Beauty Box Video in real time within Premiere Pro. F’ing amazing for a $550 video card.

single handedly knocked out the Mac Pro and two AMD D500s. Apple should be embarrassed.

I will note, that for rendering and using the apps, the Mac Pro

is about on par with the $900 PC + 980. I still would expect more performance from Apple’s $4000 machine but at least it’s not an embarrassment.