I recently came across a blog post by Fuzzy Duenkel, a photographer over in Wisconsin. He makes a pretty passionate case against using scene swapping (e.g. the type of stuff you do with Primatte and green screen) for traditional, ‘classic’ portraits. By and large I agree with him. I don’t think it’s a great use of the technology to put someone in a place they’ve never been so they can say they were there. For novelty photos and the like, it’s great, but for a ‘classic’ portrait, maybe not so much. But there’s more to portraits than just the classic look. 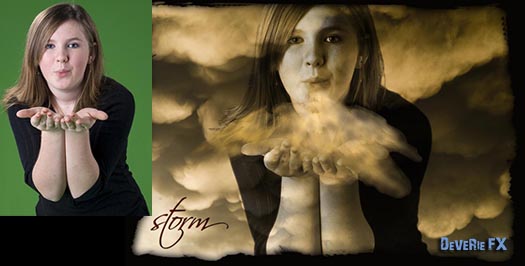 Let’s define the classic portrait. It’s a portrait of a person at a place and time, exactly as they are. Sitting in their car, standing with a violin with a regular muslin background behind them, walking on a beach, etc.

However, there’s more to portraits than just the classic look.  Putting someone in front of the effiel tower so that they can tell all their friends they went to France is cheesy. But sometimes portraits are more about creating a story, a fantasy, or something else that provokes an emotional response. Creating an image that not so much captures that person at that moment, but captures their dreams, goals, desires, and how they veiw themselves at that moment.

It’s not about deceiving the viewer. It’s about letting the viewer see more of them than a classic portrait would show. Green screen (or scene swapping however you do it) can give you flexibility in creating that story for them. 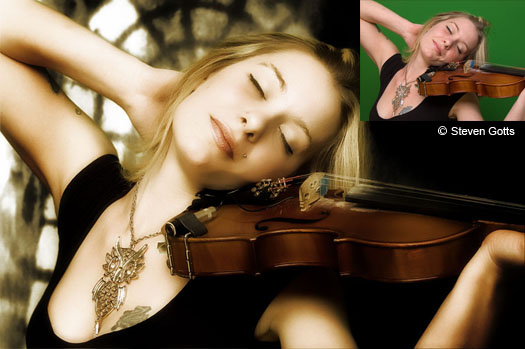 Are the portraits created this way going to be their favorite image of themselves 15 years down the line? Maybe, maybe not. But I would argue that to many seniors these types of images resonate more strongly in the short term than a classic photo. It allows them to really express themselves and reveal how they view themselves. Of course, much as the fashions we wore when we were 18 change, so too these types of images may end up looking dated. So shooting a classic portrait, as well as an ‘enhanced’ portrait, is worthwhile.

I’m certainly not arguing against classic portraits. They can be timeless, and because of that are potentially more valuable long term. Just don’t overlook non-traditional portraits. They can provide a great deal of emotional impact for seniors (or anyone) that are wrestling with new identities, dreams, and much more.

8 thoughts on “Portrait Illusions – Green Screen and Other Tricks”