I love digital artwork — and it’s what pays the bills! — but it’s always wonderful to seek out non-digital artwork. Through Digital Anarchy, I look at a lot of artist websites and portfolios. They trickle in as email addresses attached to sales receipts or support requests, and I often click through to look at the URL.

This week I stumbled upon photos of some very unique and beautiful artwork. I don’t quite recall what series of clicks brought me here, but the artist is Jason de Caires Taylor and the site is www.underwatersculpture.com.

Images from the site: 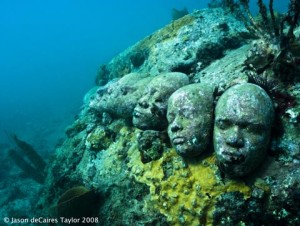 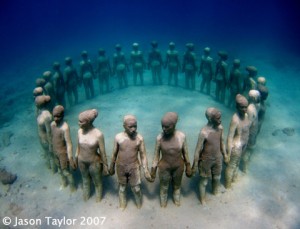 I volunteer with an arts organization called Burning Man, and this imagery reminds me of a wonderful artist who shows at the annual event. This artist’s work is shown above water; in a desert, in fact. But the texture and color palette, his blend of synthetic and natural media, and the repetition of figures within most compositions all make me think of Peter Hudson, www.hudzo.com.

Hudson makes zoetropes, which are rotating sculptures that produce an illusion of action from a rapid succession of static pictures. Some of them are half above ground, others are suspended. My favorite one is the first piece that Hudson showed in 2004, called the Swimmers. Another great one is Homouroboros, nicknamed ‘The Monkeys’, from 2007. During the day, the swimmers are motionless and you can examine the individual figures. At night, the zoetropes spin and flickering light makes the figures appear to be swimming or the monkeys jumping. 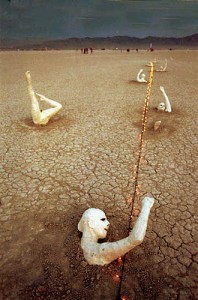 From the Black Rock Arts site, a sponsor of Hudson’s post-Burning Man shows: 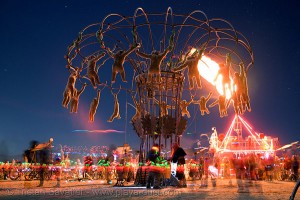 What I find especially interesting about Taylor and Hudson’s sculptural pieces is how beautifully they each function as a photography pieces. In particular, in the case of Taylor’s underwater sculptures, the art can’t _really_ be shown in its natural environment because of, errr, breathing considerations, so the documentation is important in promoting the work. The underwater sculptures are designed to be seen from land, but like most public art, many people will see them only in photos. The composition and angle of the photo is very important to expressing and promoting the work.

Once again, it is not just the art that is important. It is also the lens that captures it for the rest of the world to see.