Beauty Box makes extensive use of your video card’s GPU (graphic processing unit) to speed the plugin up. Usually this works great and results in the plugin working quickly.

However, it can cause problems. The GPU has a lot less memory than your computer does, so it’s prone to run out of memory. This is especially true when other applications are trying to use it. After Effects, Premiere, Final Cut, and most of the other apps we plug into also use the GPU. So do many other plug-ins. All this software trying to make use of a limited resource can be problematic.

Older video cards are also a problem. Beauty Box is doing some heavy duty processing and the older video cards may not be up to the task. Particularly if you’re using very high resolution video or photos.

So what to do about it? Here’s some fixes:

2- Turn off UseGPU at the bottom of the Beauty Box parameter list. This will tell Beauty Box to do the rendering on the CPU where there’s a lot more memory available. This will potentially slow the rendering speeds down significantly especially in Premiere and FCP. (see #7 below for some more info on this) 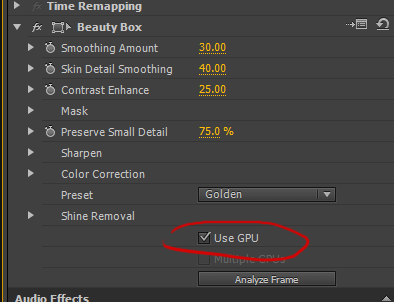 3- Make sure your OS, host apps, and drivers are up to date. One significant cause for problems on the Mac is older OSes (like 10.6.8). Apple makes the video card drivers, unlike on the PC side where AMD or Nvidia make the drivers for their cards. Apple only puts the newest drivers in the latest OS. So if you’re running 10.6.8, you’re using a really old driver, and probably an older video card. This is not a good combination for heavy GPU use. The AMD driver is particularly bad in 10.6 and 10.7. For this reason…

4- We recommend Nvidia cards. Partially because of Apple’s poor AMD driver.  So it’s not all AMD’s fault, but overall we’ve had a lot more problems with AMD cards than Nvidia. Both on PCs and Macs.

5- Restart the app and computer. If you’ve been working for a while, and there are multiple apps/plugins using the GPU, you can start making the app and system unstable. If the problem cropped up out of nowhere, a system restart may be in order.

6- If you’re crashing as you apply the plugin, manually changing one of the support files we create may help. The file you want to change is called: DA_OpenCL_Devices.txt

You should see the file named: DA_OpenCL_Devices.txt

Please change all instances of ‘On’ to ‘Off’. So the above example would look like this:

Save the file and retry Beauty Box.

7- Use After Effects to do the rendering. AE makes the best use of multi-processing of any host app we’ve seen. Since it’s using multiple processors, the GPU plays less of a role. The more regular processors you’re using, the less the GPU matters. The editing apps like Premiere and FCP are not as good (or fast) at handling render intensive projects. They’re designed for editing speed, not rendering speed.

GET SUPPORT: If you’re still having problems, please email us at sales@nulldigitalanarchy.com. You can also call at 415-287-6069, but you may get a faster response emailing us, as we’re not always in the office.