I’ve always said that I’d prefer to have an Evil Geek (Bill Gates) rule the world instead of an Evil Marketing Guy (Steve Jobs). Sort of like the difference between having the nerds or the cool kids run your high school. And sure enough, now that Steve has a dominent platform, he’s running it like the cool kids would.

I mean seriously. Geek evil is sort of like ‘pinky and the brain’ evil. Yeah, they might take over the world, but that’s what they plan every night. And even if they succeed, all they’ll end up doing is having chair jumping contests and all night Star Trek marathons (how else do you explain much of Microsoft’s software?)

END_OF_DOCUMENT_TOKEN_TO_BE_REPLACED

So according to a story in todays Wall Street Journal, Apple is feeling stung by the recent Microsoft ads that show regular folks shopping for laptops and trying to buy one under $1000. Here’s one of the Laptop Hunter ads:

Clever commercials, not quite as clever as the Mac vs. PC ads, but obviously effective. Apple apparently had lawyers call Microsoft and request they stop running the ads.

Only Apple would have the balls to call a competitor and ask them to stop running ads that make them look bad. “Those ads are true! How dare you run them!” Poor Apple.  It’s kind of hilarious.

Here’s a link to the Journal article if you want to read it for yourself.

btw… It is true that the same laptop will usually be cheaper on the Windows side, especially if you time your purchase with a Dell 30% off sale, which are frequent these days. The fact that Apple’s machines never go on sale makes them more pricey than similar Windows machines which are constantly on sale. The laptops in the Laptop Hunter ads are usually a bit less powerful than the higher priced Apple, but the reality of computers is that many people don’t need the extra power.

fwiw… I’m platform agnostic. I use both Macs and PCs and have a love/hate relationship with both. If I get to a point where I’m thinking about the operating system, it means that said computer has done something that makes me want to drop kick it through a window. I haven’t found either platform to be more or less problematic. Yes, Vista 1.0 sucked… but then, OS X 10.2 was fraught with problems as well. It happens.

Another thought about NAB, on the subject of streaming video across the web and other platforms. Companies were talking a lot about tying in with Microsoft Silverlight. This is a web browser plugin that plays video and other media content through the web browsers without requiring other plugins. Does that make sense? Basically, Silverlight is supposed to get around browser and file format related issues to make it easier for all of us to view content. 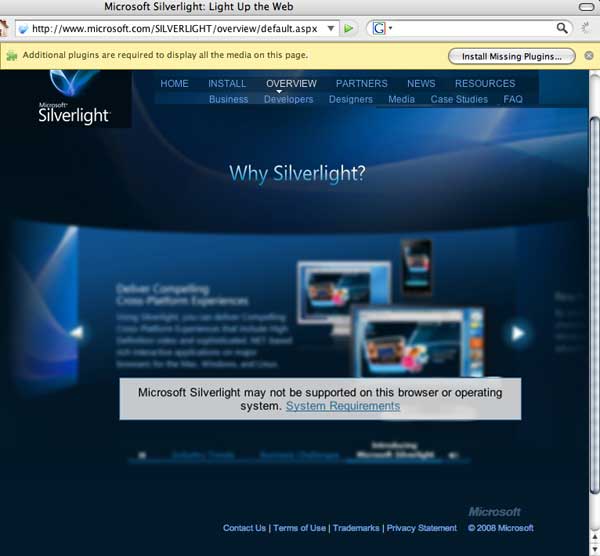 END_OF_DOCUMENT_TOKEN_TO_BE_REPLACED

So the latest news re: Yahoo is that they’re looking for News Corp to save them from the evil clutches of Microsoft.

Yes, News Corp. The most excellent company that brings you the tabloid New York Post and the other bastion of high minded journalism – Fox news.

So somewhere in their muddled minds, Bill Gates is more evil than Rupert Murdoch. Are you kidding me?

I mean, sure, Bill and Microsoft are evil but they are evil in sort of a benign geeky way. Even Steve Jobs is more evil (evil marketing geniuses trump evil geeks… trust me on it… you don’t want to live in a world where Steve Jobs has 90% market share)