Posture Exercises: The Good and The Bad

There are a lot of books out there on how to deal with back pain. Most of them are relatively similar and have good things to say. Most of them also have minor problems, but overall, with a little guidance from a good physical therapist, they’re very useful. 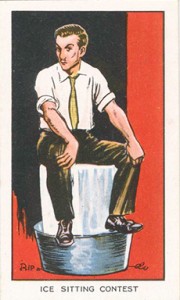 You don’t need to sit on ice to get good posture!

The two of I’ve been using are:

Back RX by Vijay Vad

8 Steps to a Pain Free Back (Gokhale Method)

Both have some deficiencies but overall are good and complement each other. I’ll talk about the good stuff first and get into my problems with them later (mostly minor issues).

There’s also another book, Healing Back Pain, which I’m looking into and says some valuable things. It posits that the main cause of the pain is not actually structural (disc problems, arthritis, etc) but in most cases caused by stress and the muscles tensing. I’ll do a separate post on it as I think the mind plays a significant role and this book has some merit.

Back RX is a series of exercise routines designed to strengthen your back. It pulls from Yoga, Pilates, and regular physical therapy for inspiration. If you do them on a regular basis, you’ll start improving the strength in your abs and back muscles which should help relieve pain over the long term.

As someone that’s done Yoga for quite some time, partially in response to the repetitive stress problems I had from using computers, I found the routines very natural. Even if you haven’t done Yoga, the poses are mostly easy, many of them have you lying on the floor, and are healthy for your back. You won’t find the deep twisting and bending poses you might be encouraged to do at a regular yoga studio.

It also encourages mind/body awareness and focuses a bit on breathing exercises. The book doesn’t do a great job of explaining how to do this. If you’re not already a yoga practitioner or have a meditation practice you’ll need some guidance. The exercises have plenty of value even if you don’t get into that part of it. However, mindfulness is important. Here are a few resources on using meditation for chronic pain:

The 8 Steps to a Pain Free Back (Gokhale Method) is another good book that takes a different approach. BackRX provides exercise routines you can do in about 20 minutes. The Gokhale Method shows modifications to the things we do all the time… lying, sitting, standing, bending, etc. These are modifications you’re supposed to make throughout the day.

She has something of a backstory about how doctors these days don’t know what a spine should look like  and that people had different shaped spines in the past. In a nutshell, the argument is that because we’ve become so much more sedentary over the last 100 years (working in offices, couch potato-ing, etc) our spines are less straight and doctors now think this excessively curved spine is ‘normal’. I’m very skeptical of this as some of her claims are easily debunked (more on that later). However, it does not take away from the value of the exercises. Whether you buy into her marketing or not, she’s still promoting good posture and that’s the important bit.

Some of her exercises you will find similar to other Posture books. Other Gokhale exercises are novel. They may not all resonate with you, but I’ve found several to be quite useful. 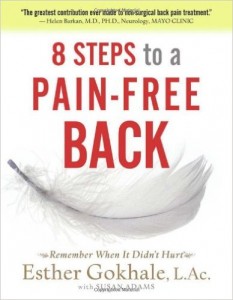 All of the exercises focus on lengthening the spine and provide ways to hold that posture above and beyond the usual ‘Sit up straight!’. She sells a small cushion that mounts on the back of your chair. I’ve found this useful, if only in constantly reminding me to not slump in my Steelcase chair (completely offsetting why you spent the money on a fancy chair). It prevents me from leaning back in the chair, which is the first step to slumping. It also does help keep your back a bit more straight. There are some chairs that are not well designed and the cushion does help.

But ultimately they only work if you’re committed to doing them over the long term. You also have to be vigilant about your posture. If you’re in pain, this isn’t hard as your back will remind with pain whenever you’re not doing things correctly. It’s harder if you’re just trying to develop good habits and you’re not in pain already.

Most people don’t think about this at all, which is why 80% of the US population will develop back pain problems at some point. So even if you only read the Gokhale book and just work on bending/sitting/walking better you’ll be ahead of the game.

So what are the problems with the books?

Both the Gokhale Method and BackRX have some issues. (again, these don’t really detract from the exercises in the book… but before you run out and tell your doctor his medical school training is wrong, you might want to consider these points)

Gokhale makes many claims in her book. Most of them involve how indigenous cultures sit/walk/etc and how little back pain is in those cultures. These are not easily testable. However, she makes other claims that can be tested. For one, she shows a drawing of a spine from around 1900 and drawing that she claims was in a recent anatomy book. She put this forth as evidence that spines used to look different and that modern anatomy books don’t show spines they way they’re supposed to look. This means modern doctors are being taught incorrectly and thus don’t know what a spine should look like. The reality is that modern anatomy books show spines that look nothing like her example, which is just a horrible drawing of a spine. In fact, illustrations of ‘abnormal’ spines are closer to what she has in her book.

She also shows some pictures of statues to illustrate everyone in ancient times walked around with a straight back. She apparently didn’t take Art History in college and doesn’t realize these statues from 600 BC are highly stylized and were built like that because they lacked the technology to sculpt more lifelike statues. So, No, everyone in ancient Greece did not ‘walk like an Egyptian’.

BackRX has a different issue. Many of the photos they show of proper poses are correct for the Back, BUT not for the rest of the body. A common pose called Tree Pose is shown with the foot against the knee, similar to this photo:

This risks injury to the knee!  The foot should be against the side of the upper thigh.

Likewise, sitting properly at a desk is shown with good back posture, but with forearms and wrist positioned in such a way to ensure that the person will get carpel tunnel syndrome. These are baffling photos for a book discussing how to take care of your body.

Most of the exercises in this book are done lying down and are fine. For sitting and standing poses I recommend googling the exercise to make sure it’s shown correctly. For example, google ‘tree pose’ and compare the pictures to what’s in the book.

Overall they’re both good books despite the problems. The key thing is to listen to your body.  Everything that is offered may not work for you so you need to experiment a bit. This includes working with your mind, which definitely has an effect on pain and how you deal with it.