Most of us have heard of the rule of thirds. And probably for most readers of this blog it’s second nature by now. But for those somewhat new to photo/videography or if you just want to see how someone else uses/breaks the rules, I figured a serendipitous photoshoot recently would be a good example.

What is the Rule of Thirds? It’s splitting an image into three parts vertically and horizontally. This can help you create a more pleasing image composition. And like all rules, it’s meant to be bent and broken. Let’s talk about how to use it.

Sometimes you use the rule of thirds while you’re shooting. If you’re doing a portrait, you can pose your model, frame her in camera and take the shot.

Personally, I tend to be more of a wildlife photographer. Birds and whales don’t usually pose for you… you’re just trying to take the shot as fast as f’ing possible while you have the chance! You can crop the photo later to make it fit the rule of thirds (or not).

Recently I was sitting on the balcony of my house and a hawk decided to perch himself right in front of me on a neighbors house. So, grabbed the camera for an impromptu photoshoot:

Those are the cropped ‘rule of third’ shots. Here are the original shots (which are cool in their own way by showing more of the environment):

Let’s talk about why I cropped them the way I did. First off, look at the cropped images. Did you notice that I’m trying to tell a small story with how they’re cropped? (or, at least, framing things so there’s some context to the sequence of images)

Let’s take a look at the first image. One of the things that makes the Rule of Third compelling is that asymmetrical compositions generally look better. But not always! Here we have the ‘hero’ shot of our hawk. I’m introducing him and, as such, he’s pretty much in the center of the frame.

In the next picture, he turns his head to look at something. Now he’s off center and edging towards left and down. We’re creating space off to the right side of the image. Where is he looking? What is he looking at? I want the viewer to be as curious about that as the hawk is. So I want to add space in the image so you can follow his gaze.

Now he’s preparing to take off! His wings are up and he’s getting ready to fly. I want to add even more space to the right and above him. So I crop the image so he’s split down the middle by the first third line. Because his wings are raised, he’s centered vertically, but he’s still weighted towards the lower third. Hopefully your eye is drawn to where he might be going.

Lift Off! His wings come down and he levitates in preparation to fly. Again, I want the greenery in the shot, so he’s a little lower in the frame than is ideal, but it works. He’s about to take off so having a lot of space up and in the direction he’s going to be flying is all good. (I love this shot… birds of prey are just so amazing) However, usually you don’t want your subject quite so close to the edge. I think it’s a great shot, but you could definitely make the case there’s too much space in the rest of the image. If the trees were closer, I would’ve cropped it differently, but to get them in the image, I had to stretch it a bit towards the upper, right corner. With wildlife you don’t always get to pick your shot!

And he’s off! And… so is this image. Why is this not a great composition? The hawk really should be centered more vertically. He’s a little low in the frame. To correct it, I’d at least move where the wing bends into the upper third.

Bonus tip: the glaring issue with all these photos… well, you can see it hopefully. It’s something easily fixed with Photoshop’s Content Aware Fill. And if you can’t see the problem, perhaps it’s absence will give you a clue:

So hopefully that’s a good intro on how to use the rule of thirds. It’s really about drawing the eye in the direction the subject is looking or heading towards. And, of course, it’s not a hard and fast ‘rule’. Just one way to think about composing your images.

For whatever reason I’ve seen several articles/posts over the last few days about whether you can be a photo/videographer with a camera phone. Usually the argument is that just because the iPhone (or whatever) can take the occasional good video/pictures, it doesn’t make you a good videographer. Of course not. Neither does a 5Dm4 or an Arri Alexa. 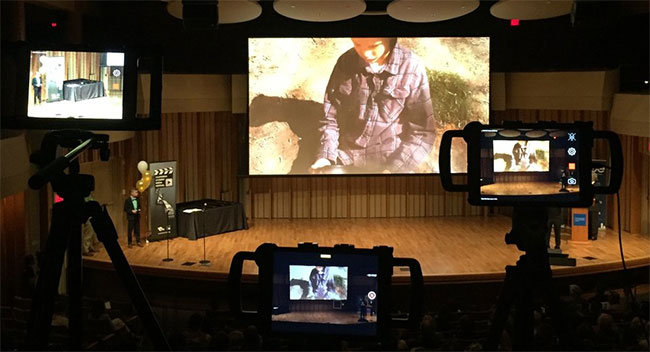 But what if you have a good eye and are a decent videographer? I think a lot of the hand wringing comes from people that have spent a lot of money on gear and are seeing people get great shots with their phone. It’s not going to change. The cameras in a lot of phones are really good and if you have a bit of skill, it can go a long way. You can check out this blog post comparing the iPhone’s slow motion video capabilities to a Sony FS700. The 10x price difference doesn’t beget a 10x quality difference.

There is obviously a place for long or fast lenses that you need a real camera for. There are definitely shots you won’t get with a phone. However, there are definitely shots you can get with a phone that you can’t get with your big, fancy camera. Partially just because you ALWAYS have your phone and partially because of the size. Sometimes the ability to spontaneously shoot is a huge advantage.

Then you add something like Dave Basaluto’s iOgrapher device and you’ve got a video camera capable of some great stuff, especially for stock or B roll.

There are issues for sure. Especially with these devices trying to shoot 4K, like a GoPro. It doesn’t matter how well lit and framed the shot is because it’s often got massive compression artifacts.

Overall though, the cameras are impressive and if you’ve got the skills, you can consistently get good to great shots.
What’s this got to do with Digital Anarchy? Absolutely nothing. We just like cool cameras no matter what form they take.  :-)

(and, yes, I’m looking forward to getting the new 5D mark4. It was finally time to upgrade the Digital Anarchy DSLR)