I decided to try Transcriptive way before I became part of the Digital Anarchy family. Just like any other aspiring documentary filmmaker, I knew relying on a crew to get my editing started was not an option. Without funding you can’t pay a crew; without a crew you can’t get funding. I had no money, an idea in my head, some footage shot with the help of friends, and a lot of work to do. Especially when working on your very first feature film.

Besides being an independent  Filmmaker and Social Media strategist for DA, I am also an Assistive Technology Trainer for a private company called Adaptive Technology Services. I teach blind and low vision individuals how to take advantage of technology to use their phones and computers to rejoin the workforce after their vision loss. Since the beginning of my journey as an AT Trainer – I started as a volunteer  6 years ago – I have been using my work to research the subject and prepare for this film.

My movie is about the relationship between the sighted and non-sighted communities. It seeks to establish a dialog between people with and without visual disabilities so we can come together to demystify disabilities to those without them.  I know it is an important subject, but right from the beginning of this project I learned how hard it is to gather funds for any disability-related initiative. I had to carefully budget the shoots and define priorities. Paying a post-production crew was not (and still is not) possible. I have to write and cut samples on my own for now. Transcriptive was a way for me to get things moving by myself  so I can apply for grants in the near future and start paying producers, editors, camera operators, sound designers, and get the project going for real. The journey started with transcribing the interviews. Transcriptive did a pretty good job with transcribe the audio from the camera as you can see below. Accuracy got even better when transcribing audio from the mic.

The idea of getting accurate automated transcripts brought a smile to my face. But could Artificial Intelligence really get the job done for me? I never believed so, and I was right. The accuracy for English interviews was pretty impressive. I barely had to do any editing on those. The situation changed as soon as I tried transcribing audio in my native language, Brazilian Portuguese. The AI transcription didn’t just get a bit flaky; it was completely unusable so I decided to do not waste more time and start doing my manual transcriptions.

I have been using Speechmatics for most of my projects because the accuracy is considerably higher than Watson  with English. However, after trying to transcribe in Portuguese for the first time, it occurred to me Speechmatics actually offers Portuguese from Portugal while Watson transcribes Portuguese from Brazil. I decided to give Watson a try, but the transcription was not much better than the one I got from Speechmatics.

It is true the Brazilian Portuguese footage I was transcribing was b-roll clips recorded with a Rhode mic; placed on top of my DSLR.  They were not well mic’d sit down interviews. The clips do have decent audio, but also involve some background noise that does not help foreign language speech-to-text conversion. At the time I had a deadline to match and was not able to record better audio and compare Speechmatics and Watson Portuguese transcripts. Will be interesting to give it another try, with more time to further compare and evaluate if there are advantages on using Watson for my next batch of footage. 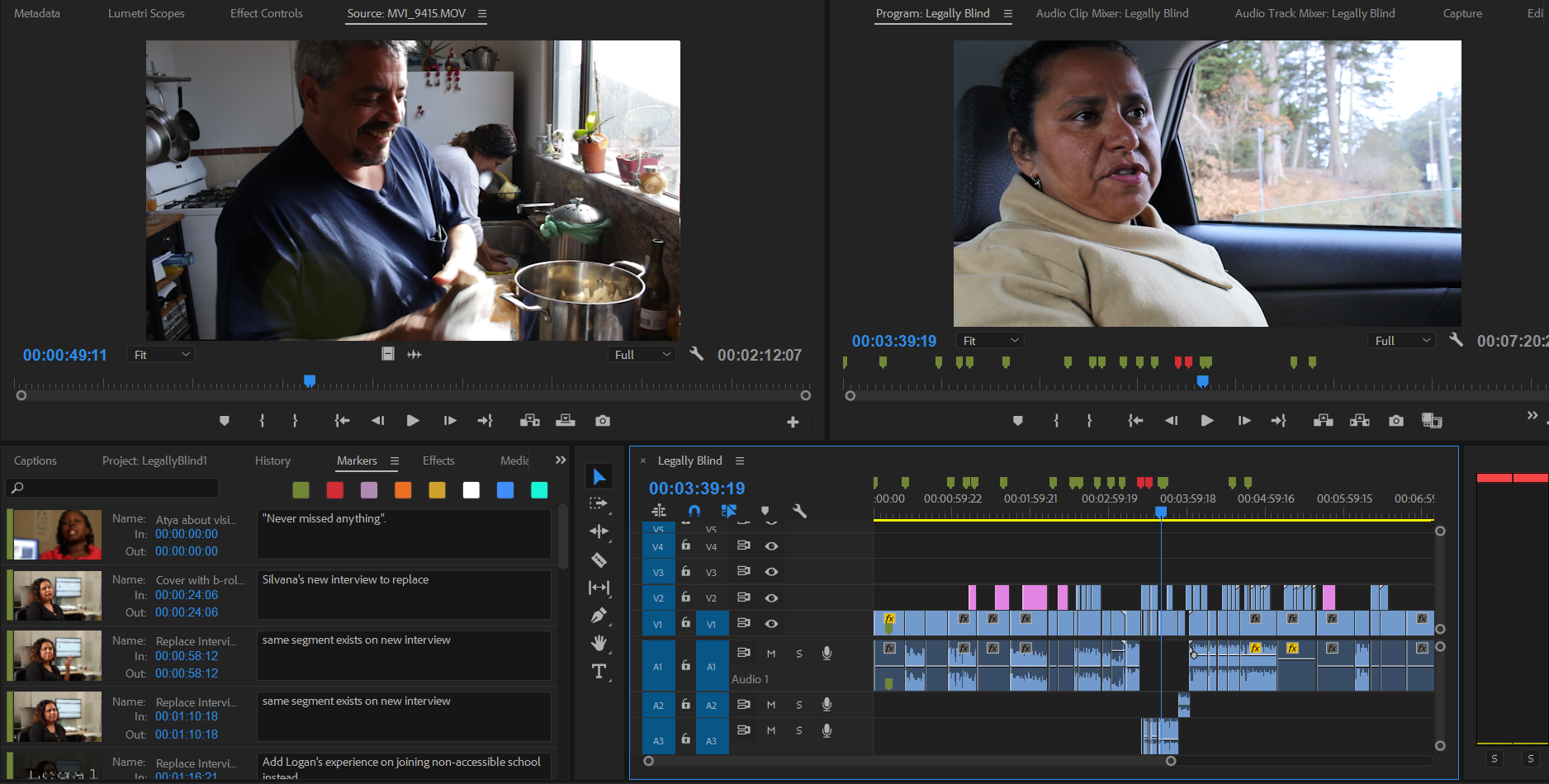 Days after my failed attempt to transcribe Brazilian Portuguese with Speechmatics, I went back to the Transcriptive panel for Premiere, found an option to import my human transcripts, gave it a try, and realized I could still use Transcriptive to speed up my video production workflow. I could still save time by letting Transcriptive assign timecode to the words I transcribed, which would be nearly impossible for me to do on my own. The plugin allowed me to quickly find where things were said in 8 hours of interviews. Having the timecode assigned to each word allowed me to easily search the transcript and jump to that point in my video where I wanted to have a cut, marker, b-roll or transition effect applied.

My movie is still in pre-production and my Premiere project is honestly not that organized yet so the search capability was also a huge advantage. I have been working on samples to apply for grants, which means I have tons of different sequences, multicam sequences, markers that now live in folders inside of folders. Before I started working for DA I was looking for a solution to minimize the mess without having to fully organize it or spend too much money and Power Search came to the rescue.  Also, being able to edit my transcripts inside of Premiere made my life a lot easier.

Last month, talking to a few film clients and friends, I found out most filmmakers still clean up human transcripts. In my case,  I go through the transcripts to add punctuation marks and other things that will remind me how eloquent speakers were in that phrase. Ellipses, question marks and exclamation points remind me of the tone they spoke allowing me to get paper cuts done faster.  I am not sure ASR technology will start entering punctuation in the future, but it would be very handy to me. While this is not a possibility, I am grateful Transcriptive now offers a text edit interface, so I can edit my transcripts without leaving Premiere.

For the movie I am making now I was lucky enough to have a friend willing to help me getting this tedious and time-consuming part of the work done so I am now exporting all my transcripts to Transcriptive.com.  The app will allow us to collaborate on the transcript. She will be helping me all the way from LA, editing all the Transcripts without having to download a whole Premiere project to get the work done.

Curious to see if Transcriptive can speed up your video production workflow? Get a Free trial of Transcriptive and PowerSearch Windows or Mac  and test it yourself!