As many of you know, we’ve come out with a real time version of Beauty Box Video. In order for that to work, it requires a really fast GPU and we LOVE the GTX 980. (Amazing price/performance) Nvidia cards are generally fastest  for video apps (Premiere, After Effects, Final Cut Pro, Resolve, etc) but we are seeing real time performance on the higher end new Mac Pros (or trash cans, dilithium crystals, Job’s Urn or whatever you want to call them).

BUT what if you have an older Mac Pro?

With the newer versions of Mac OS (10.10), in theory, you can put any Nvidia card in them and it should work. Since we have lots of video cards lying around that we’re testing, we wondered if our GTX 980, Titan and Quadro 5200 would work in our Early 2009 Mac Pro. The answer is… 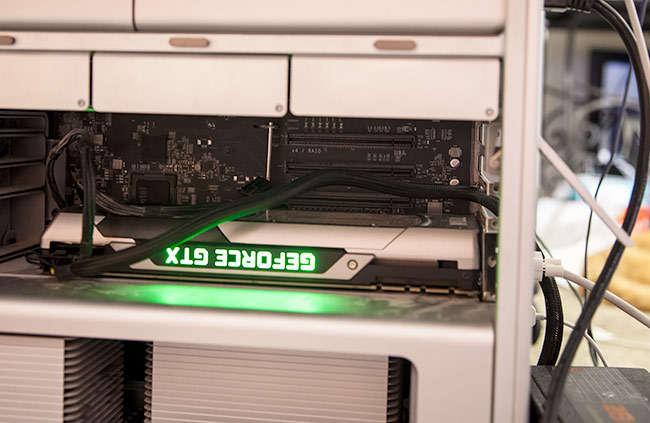 is the easier of the two GeFroce cards, mainly because of the power needed to drive it. It only needs two six-pin connectors, so you can use the power supply built into the Mac. Usually you’ll need to buy an extra six-pin cable, as the Mac only comes standard with one, but that’s easy enough. The Quadro 5200 has only a single 6-pin connector and works well. However, for a single offline workstation, it’s tough to justify the higher price for the extra reliability the Quadros give you. (and it’s not as fast as the 980)

The tricky bit about the 980 is that you need to install Nvidia’s web driver. The 980 did not boot up with the default Mac OS driver, even in Yosemite. At least, that’s what happened for us. We have heard of reports of it working with the Default Driver, but I’m not sure how common that is. So you need to install the Nvidia Driver Manager System Pref and, while still using a different video card, set the System Pref to the Web Driver. As so:

You can download the Mac Nvidia Web Drivers here:

Install those, set it to Web Driver, install the 980, and you should be good to go.

What about the Titan or other more powerful cards?

There is one small problem… the Mac Pro’s power supply isn’t powerful enough to handle the card and doesn’t have the connectors. The Mac can have two six pin power connectors, but the Titan and other top of the line cards require a 6 pin and an 8 pin or even two 8-pin connectors. REMINDER: The GTX 980 and Quadro do NOT need extra power. This is only for cards with an 8-pin connector.

The solution is to buy a bigger power supply and let it sit outside the Mac with the power cables running through the expansion opening in the back.

As long as the power supply is plugged into a grounded outlet, there’s no problem with it being external. I used a EVGA 850W Power Supply

, but I think the 600w would do. The nice thing about these is they come with long cables (about 2 feet or so) which will reach inside the case to the Nvidia card’s power connectors. 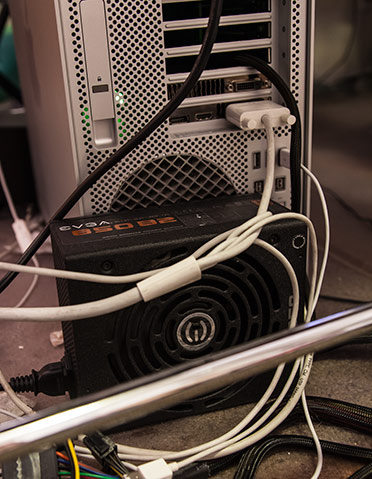 One thing you’ll need to do is plug the ‘test’ connector (comes with it) into the external power supply’s motherboard connector. The power supply won’t power on unless you do this.

Otherwise, it should work great! Very powerful cards and definitely adds a punch to the Mac Pros. With this setup we had Beauty Box running at about 25fps (in Premiere Pro, AE and Final Cut are a bit slower). Not bad for a five year old computer, but not real time in this case. On newer machines with the GTX 980

you should  be getting real time play back. It really is a great card for the price.