I was particularly struck by this watching the NCAA Basketball Tournament this weekend. Seemed like I was seeing flicker on  half of the slow motion shots. You can see a few in this video (along with Flicker Free plugin de-flickered versions of the same footage):

To see how to get rid of the flicker you can check out our tutorial on removing flicker from slow motion sports.

The LED lights are most often the problem. They circle the arena and depending on how bright they are, for example if it’s turned solid white, they can cast enough light on the players to cause flicker when played back in slow motion. Even if they don’t cast light on the players they’re visible in the background flickering. Here’s a photo of the lights I’m talking about in Oracle arena (white band of light going around the stadium): 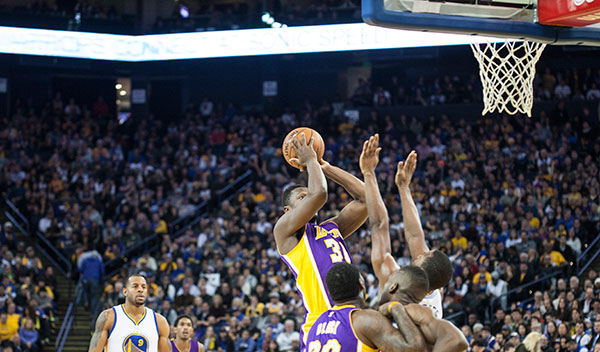 While Flicker Free won’t work for live production, it works great for de-flickering this type of flicker if you can render it in a video editing app, as you can see in the original example.

It’s a common problem even for pro sports or high profile sporting events (once you start looking for it, you see it a lot). So if you run into with your footage, check out the Flicker Free plugin for most video editing applications!

I love photographing sports. It’s a lot like shooting wildlife/Humpback Whales in many ways. It requires a lot of patience and quick shooting skills.

Unfortunately, I’m usually limited to shooting from the stands. So this makes the process a little harder but if you can get good seats you can make it work. As it happens, I recently got third row seats to the Golden State Warriors game against the Lakers. So here are a few tips for getting great shots if you can’t actually get a press pass. 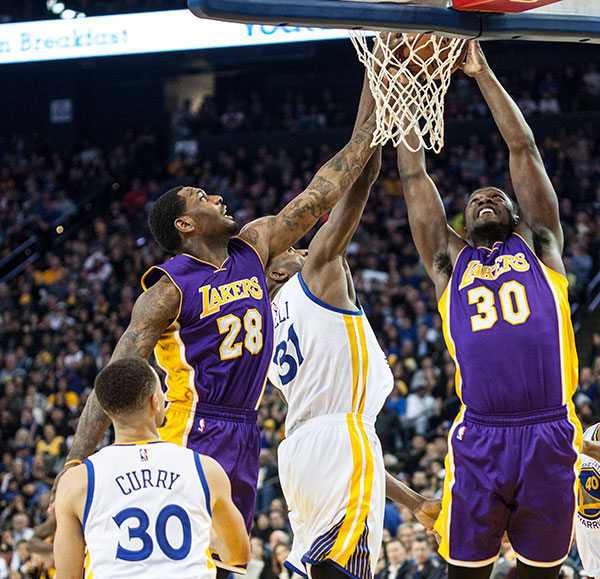 The first thing you need to check is how long of a lens you’re allowed to bring in. In this case it was a 3″ or less. So that’s what needs to be attached to the camera. (see the end of the article for some ‘other’ suggestions)

I ended up using a 100mm f2 lens for these shots, which is exactly 3″. You want as fast of a lens as possible. You’re not going to be able to use a flash, so you’re reliant on the stadium lighting which isn’t particularly bright. f2.8 is really a minimum and even then you’ll have the ISO higher than you’d like. Like wildlife, the action moves fast, so the wider the aperture, the faster the shutter speed you’ll have, and the sharper the shots will be.

The minimum shutter speed is probably about 1/500 and you’d like 1/2000 or higher. Hence the need for a f2 or f2.8 lens. Otherwise, the action shots, where you really want it to be sharp, will be a bit blurry.

Seat placement matters. Obviously you want to be as close as possible, but you also want to be at the ends of the court/field. That’s where most of the action happens. Center court seats may be great for watching the game, but behind the goal seats get you up close and personal for half of the action. Much better for photography and hence one of the reasons the press photogs are on the baseline. 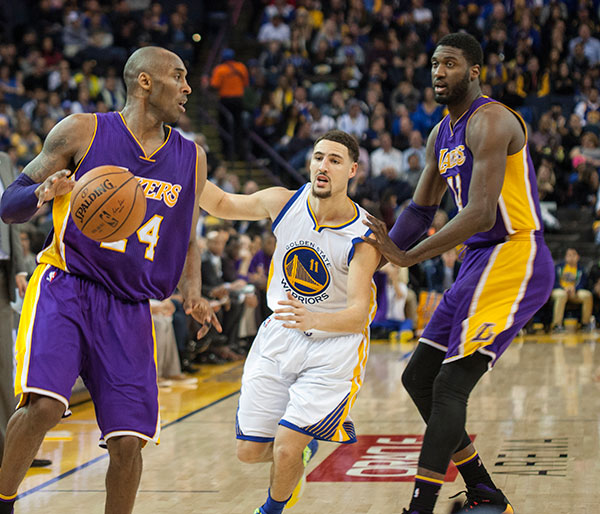 What if you’re not happy with a 3″ lens? Well, you COULD give a friend a larger lens and let them try and smuggle it in. Since it’s not attached to the camera, most of the security people don’t recognize it as a camera lens. Just say it’s, you know, a binocular or something (monocular? ;-). Usually it works, worst thing that happens is you have to go back to the car and store it. You’re not trying to break the rules, you’re, uh, helping train the security staff.

If you do manage to get a larger lens in, don’t expect to be able to use it much. One of the ushers will eventually spot it (especially if it’s a big, white, L Canon lens) and call you on it. You’ll have to swap it for the other lens (or risk getting kicked out). Wait until the game is well underway before trying to use it.

Of course, the basic tips apply… Shoot RAW, make sure you have a large, empty memory card(s), a fully charged battery, don’t spill beer on the camera, etc., etc. But the critical component is getting close to  the end of the court and having a very fast shutter speed (which usually means a very wide aperture).

Shooting RAW is soooo critical. It’ll give you some flexibility to adjust the exposure and do some sharpening. Since you’ll probably have a relatively high ISO, the noise reduction capabilities are important as well. Always shoot RAW.

If you’re a photographer that loves sports, it is definitely fun to get good seats and work on your sports shooting skills. Can be a bit expensive to do on a regular basis though! 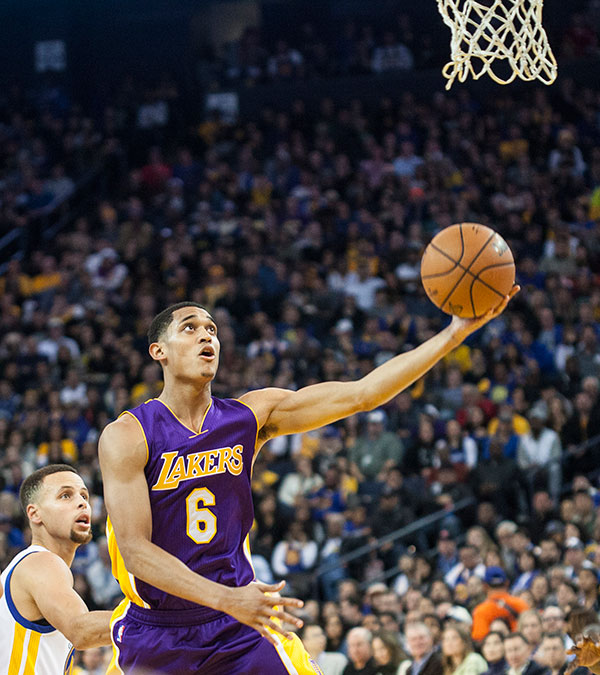