Good article on Ragen.com about the ‘4 techniques for spicing up corporate photos‘. This website typically reports and comments on Public Relations news, so it’s interesting to find this article. But since 1,000 words equal one photograph, or so the saying goes, it makes sense.

Summary of the four tips to take compelling corporate photos, which is almost an oxymoron:

“1. Change the angle. The easiest way to add interest to a potentially boring photo is to move your camera off-center. Try shooting from the sides, above, below, or behind—a different perspective can go a long way… [For instance] Salvo says she’s had some success taking award photos from behind the stage rather than in front.”

Ok, this isn’t a corporate photo. But it’s an interesting angle of my dog and his little friend. 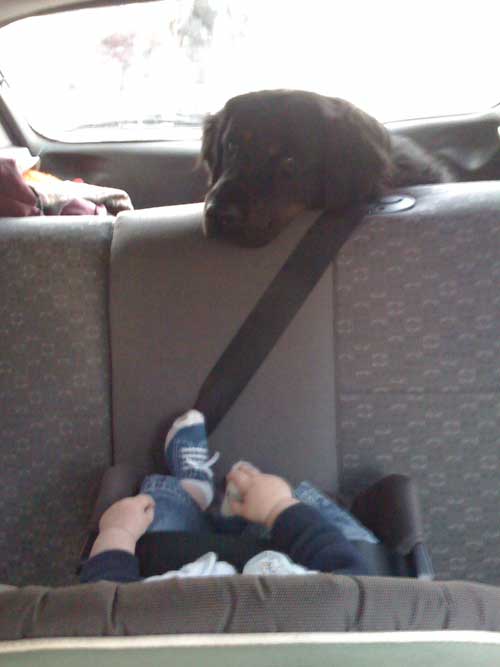 “2. Incorporate objects. Another technique Ogden uses is making a relevant object part of the photograph. For example, if he’s taking photos of people who work in a lab, he will find an empty glass beaker and take the photo of the subjects through that. Similarly, taking the photograph with something out of focus in the foreground draws the eyes to the subjects in focus, while making the composition more interesting.”

“3. Capture the emotion and action. If objects aren’t interesting enough for you, try action. A Pittsburgh-based communicator who commented on a MyRagan forum said she carries a camera around with her at company events to take candid photos. “I’ve become known as the paparazzi in my office! I’ll show up to lunch-and-learns, in-office meetings and staff social events with my camera— they beat the ‘mug’ shot any day.””

“4. Take your time. Getting the emotion and action you want might entail taking the photo before or after an award is given. That will give you, the photographer, the ability to take your time to get the right shot and give the subject time to breathe, says Salvo… Ogden doesn’t have a lot of time, but he takes a few minutes to talk with each subject and make them more comfortable with him and the photo. That, he says, makes them look more natural on camera.”

all the best -Debbie