I’ve been IM’ing today with industry friends about the Macworld keynote, or lack thereof. Most folks have been complaining that the announcements were lackluster. Which is true… but really, that’s like complaining the bus is late because of those darn passengers. ;) I don’t think that Apple CAN always wow us with new offerings. That development pace simply isn’t possible.

Frankly, as a small software company that’s been trying to keep up with their hardware and OS changes since OS X was birthed, whew, I’m glad Apple isn’t bringing out anything startlingly new right now. It’s nice that they have stopped ‘innovating’ for awhile and allowed us developers to create new products, instead of spending time recoding our older ones to work with the newest processor and platform changes.

Cribbed from two play by play of the keynote, one from CNET and the other from Macworld itself, here are the major announcements from Macworld: 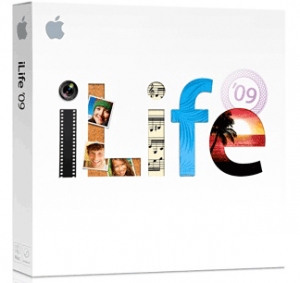 Hmm, I don’t use iLife at all. I suck my photos in through Aperture or Lightroom. Every once in awhile I will open iPhoto and the ’09 has a new ‘Faces’ technology that sounds interesting. It finds the same person across multiple photos. Goggle’s Picasa Web Albums introduced that feature in fall 2008 so I suppose Apple had to jump on it.

The technology centers around ‘geotagging’. You can also send a photo directly to Facebook or Flickr. That’s cool integration but a little scary to know how closely tied all of these large technologies are. Apple, Facebook and Flickr, all bedding together to make your photo life easier. I’ve read that Facebook is resisting Google’s data (dating?) advances but I guess Yahoo (= Flickr) is less scary somehow.

Organizing photos by ‘Events’ or ‘Places’ doesn’t resonate for me personally. People are really only interested in looking at your photos if they are in them.

The star power behind the iMovie and GarageBand demos is impressive. Movement stabilization for home movies of, errr, Africa. Rock musicians in training videos? Zoinks!

Very pretty as usual. But the battery isn’t removable or replaceable? I heartily disagree with this. Mac battery life has always been horrible, in my opinion, though it’s just the nature of the beast. My Dell batteries die too.

The demo explains that the battery will have 7-8 hours of life and should last for five years, which means people won’t be throwing out batteries. I find it hard to believe that a single battery will not crap out before the laptop does. A point that I have seen raised on news sites is whether folks will be able to upgrade their RAM if the case is locked down.

— DRM-free music through iTunes and a three price structure.

About time. I don’t know enough about this subject to figure out if the music industry has been the holdout or if Apple has. But I am happy to see that Apple is removing DRM from their iTunes music. I do legally buy all of my music but I’ve done it through Amazon exactly because of this format lockdown.

My friend told me that there’s a cost of .30/per tune to upgrade existing DRM-ed music to iTunes Plus and unlock that file. That feels very unloyal of Apple. More here.

Well, that’s my backseat driver’s chatter, along with the rest of the pundits. Written on a G5 while texting on my iPhone, of course.

One thought on “Macworld 2009 (I watched from home, just like you)”