The Palm Pre Phone has a starring role in a TV mini-series. Or did, since this series happened in early August. Coincidentally, Palm is also the sponsor of ‘Bollywood Hero’.

I know that cars — like the VW Bug, Mini Cooper and most famously Bullitt’s Mustang —  have been used as a centerpiece in movies. Don’t think a piece of hardware has been a starring role previously unless you count Carrie’s Mac laptop in Sex & The City. 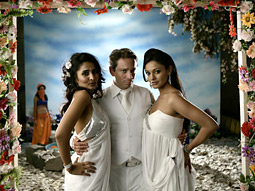 Adage.com reports on this new star:  “[T]he phone’s technical utility will be driving the next phase of the Pre’s marketing, beginning this week through a series of key branded-entertainment partnerships. Up first is an exclusive sponsorship of “Bollywood Hero,” a three-part musical miniseries premiering on IFC Aug. 6, starring “Saturday Night Live” vets Chris Kattan and Maya Rudoloph, as well as Keanu Reeves. Modernista and IFC co-created a miniseries for Palm, “A La Kattan,” featuring the actor using his Pre to help him out of different scenarios.”

The show didn’t get good reviews, as this one in Variety.com shows. But the review slams the actors and script, not the Palm Pre Phone. Which makes sense, since my iPhone is better at emoticons than I am.