One of my roles at Digital Anarchy is creating the web and print graphics. Whenever I tell someone that I do design collateral for a software company, if that person is not in technology, s/he almost immediately asks me to design a ‘small and easy’ site for free. (ps: no such animal) Either that or I am asked to help with his/her internet connection or email issues. Huh? This cartoon that I am reposting from the terrific Monstermunch.com says it all.

This topic of trying to get something for nothing — or asking the wrong person for help with a technology initiative — makes me think of a great article that I read yesterday called ‘What Price Pro for Hire?’ It came in through the e-newsletter from the magazine Videomaker. 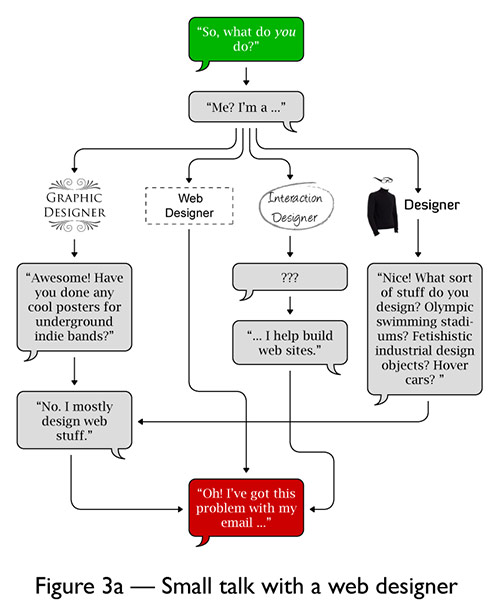 Video Chick goes through two situations (certainly of many) in which she is approached by an individual or business to do a small job. How small? As small as they can make it sound so they can pay her as little as possible. One anecdote is about a client who wants a video chronicling her precious mother’s life for a looming memorial service, but doesn’t want to pay more than $150. The other story is about a local charity who balks at her $500 production quote, buys some low-end equipment instead, and self produces a fund raising video.

Both projects get completely botched by the amateur videographer and Video Chick is called in to save the day. Of the latter project she says, “Now they were desperate, their program deadline is looming and could I please, out of the goodness of my heart, edit it and “fix” it. For what they paid for that camera, mic and software, they could have hired a pro in the first place.”

The author concludes her article with: “I wonder sometimes, why people are so willing to pay an attorney $100 an hour, or and accountant $75 an hour, without really knowing the amount of time these skilled professionals really put into their cases, but the clients will swallow and pay anyway. However, these same people seem to think that anyone can buy an affordable camera nowadays, and shoot a quality piece themselves with no training, skills, vision or ideas.”

I know this must be an issue on the photography side as well. I’ve heard from customers how difficult the market is right now, and they were saying that two years ago. Reinventing yourself and continuing to stylize and hone your craft is important. But if a potential client opts to pay their nephew’s newbie friend a few bucks instead of hiring a pro at a reduced rate, how can you fight that logic until they come back to you with a sob story and a lesson (hopefully) learned?

One thought on “Just pay the pro already…sheesh.”