I’ve always said that I’d prefer to have an Evil Geek (Bill Gates) rule the world instead of an Evil Marketing Guy (Steve Jobs). Sort of like the difference between having the nerds or the cool kids run your high school. And sure enough, now that Steve has a dominent platform, he’s running it like the cool kids would.

I mean seriously. Geek evil is sort of like ‘pinky and the brain’ evil. Yeah, they might take over the world, but that’s what they plan every night. And even if they succeed, all they’ll end up doing is having chair jumping contests and all night Star Trek marathons (how else do you explain much of Microsoft’s software?)

Much more machiavellian (or Heather-esque, if you will) If Apple doesn’t like you or doesn’t like what you’re doing you’re not in the club. So, of course, Apple won’t let developers use the tool of their choice (Flash, .Net, Java, etc.), denies apps that show political satire, and now Apple is having the police raid journalist’s homes for talking about their products in ways Apple doesn’t approve of. It’s getting a bit ridiculous and it’s not slightly ironic that this is the same Apple that used the 1984 ad to announce the Macintosh. Who knew Steve Jobs was the man on the 1984 screen? 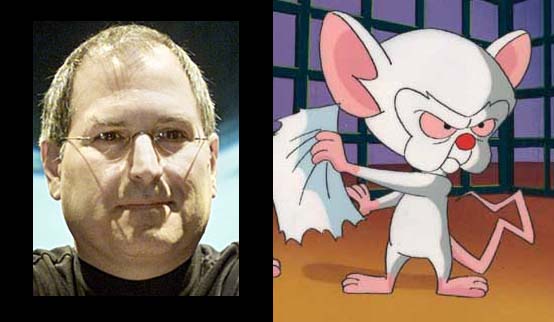