NPR recently had a story about Silicon Valley vs. Hollywood. Hollywood suffers from a lot of piracy and the Valley enables some of it. Sort of. I get the feeling that Hollywood would rather the internet go away and then they wouldn’t have to deal with the change they’re apparently so scared of. They are certainly trying to legislate the internet into oblivion.

In the NPR article producer Gavin Polone says, regarding the fact that YouTube and the like are now producing their own shows: “And they will also start to look at this very expensive property as property, and they’re not going to want to have it stolen from them”.

Guess what? They’re well aware of much it costs to make content and they are definitely in it to make money. Could it be possible there are other ways to profit from content than the standard model that Hollywood has used for the last 50-80 years? 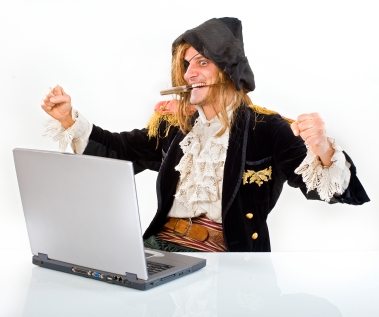 And let’s look at some of those models. Like TV. Up until the 80s, TV was completely free for the viewer. How did Hollywood make money off of that?

The real issue is loss of control. Anyone can make a movie now and broadcast it far and wide, bypassing the whole Hollywood machine. There are plenty of ways to make money off of internet distribution. I think Hollywood can figure that one out pretty easily if they want to. Hulu was a good start… but you’ve got hundreds of millions of people around the world that want to watch your shows, many of whom will pay or suffer advertisements to watch them and you can’t figure out how to make money off of that? Really? And you want to cripple the technology that enables that because there’s some web site in Sweden that you don’t like? How about you just create a legit web site that enables people to watch over the internet?

But I think one of their real reasons for trying to cripple the internet with ‘piracy’ legislation is to make it hard for anyone to stream content unless it goes through an authorized Hollywood studio/channel. It’s a control freak issue. They want to shut down sites or make it more difficult to stream any user content. It’s pathetic.

I understand piracy is an issue. I’ve created software for the last 16 years… I understand piracy, believe me. But I also understand that most people that pirate content are not customers. If they can’t get it for free, they’ll go without. On the software side of things, that means students, software collectors, etc.  people that really aren’t going to use the software. But there are people that pirate our software to use as part of their business (yep, photographers, that would go apopletic if someone stole one of their photos, stealing software. Watch out for karma…). So our focus and energy is devoted to making it difficult to do real work with pirated copies and finding ways to get them to go legal.

Hollywood needs to identify the users that will pay or watch ads and craft a solution so as many of them as possible will see through legit internet channels. Attempting to ‘shut down’ piracy is impossible and such attempts will just put burdensome restrictions on the rest of the internet and our civil liberties.

2 thoughts on “Why doesn’t Hollywood get it?”