Did you see the before and after shots that Britney Spears released? Can’t say I’m a huge fan and I would never have imagined I’d be mentioning her in the Digital Anarchy blog, but, yet, I just did. She released retouched AND unretouched photos of herself, and put them out there for comparison. The article breaks down the shots and what was changed. While I think it was a very worthwhile thing for her to do, I really wish she’d given a more intelligent quote and actually address the issue instead of saying ‘it was fun being shot in front of a wall of cotton candy’. sigh. Click here for the article.

It reminds me of the Dove ad that takes a model from walking into the studio, through the shoot, through photoshop, and out on a billboard. Amazing commercial bringing attention to the same issues. 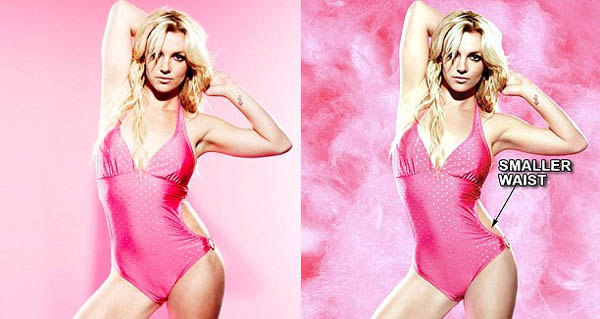 However, I feel it’s good to raise awareness of how prevalent retouching is. Particularly when it gives women impossible, barbie-like bodies that affect how girls view themselves. It’s fine to show an idealized form of beauty, but I think it’s important to educate girls on the myth that form of beauty is.

Retouching isn’t going away, and personally, I don’t have any problem selling tools that enable people to deal with some extra skin details that HD or 4K shows. But it becomes a slippery slope when you start making people thinner than they are, making their eyes bigger, their necks longer, and generally ‘sculpting’ them to the ideal of beauty. Anyways, would love to hear your thoughts on it… comment away! :-)