While writing a post about how my little iThing takes great digital photos, I did some news surfing about the shrinking size of technology. The two articles listed below caught my eye. Their topics are different but the underlying theme is similar.

First, on Computerworld.com, an article called ‘Future shock: The PC of 2019‘ talks how personal computers will look in a decade: Small. 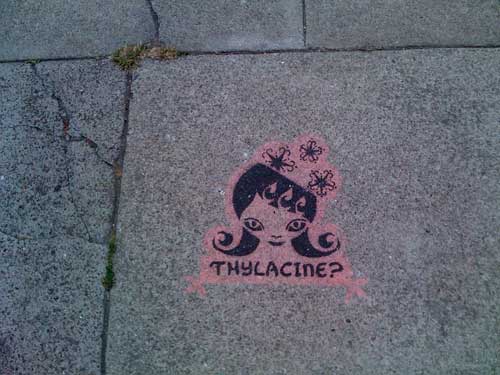 Just yesterday, I took this photo of a charming chalk stamp on the pavement. Seems to fit the topic of this post because ‘Thylacine’ is a generally extinct, but still sighted and possibly mythological creature. Just like technology can be. See this Bizzare & Extinct site for images.

“One thing everyone seems to agree on: The PC of 2019 won’t look like today’s laptops. “I’m not seeing people carrying anything that looks like a book,” says Dan Siewiorek, a professor of computer science and electrical and computer engineering at Carnegie Mellon University and director of the university’s Human-Computer Interaction Institute. “It would be like a phone or a ring or watch. It will probably take multiple form factors.”… A technical worker might have her PC in her eyeglasses, allowing her to access and view information through embedded monitors and share what she’s seeing with colleagues and supervisors via a camera in the glasses.”

Next, from the Imaging Info website, a news report about someone who has already gotten started on this vision of small technology, pun intended as you will see. Meet the ‘One-Eyed Filmmaker [who] Conceals Camera in Prosthetic‘.

“A one-eyed documentary filmmaker is preparing to work with a video camera concealed inside a prosthetic eye, hoping to secretly record people for a project commenting on the global spread of surveillance cameras. Canadian Rob Spence’s eye was damaged in a childhood shooting accident and it was removed three years ago. Now, he is in the final stages of developing a camera to turn the handicap into an advantage… His special equipment will consist of a camera, originally designed for colonoscopies, a battery and a wireless transmitter. It’s a challenge to get everything to fit inside the prosthetic eye, but Spence has had help from top engineers, including Steve Mann, who co-founded the wearable computers research group at Massachusetts Institute of Technology in Cambridge, Massachusetts.”

This shrinking technology all makes sense. The iPhone is now a video portal tool, both for receiving and showing video, and surely there’s a tidal wave of editing tools just waiting to break into that app space. People wander around with Bluetooth phone sets in their ear and I am no longer startled by someone appearing to talk to herself in the supermarket. Hey, I’m all for my technology having subtlety as long as it’s affordable. Hopefully fashionable as well.