With so much technology around, can you use it to enhance photographs to tell more complete and compelling stories?

One beautiful example comes from Todd Sanchioni. Todd is a San Francisco based photographer who recently had an exhibit that featured Laos street musicians. The photographs were compelling in their own right, but he added an mp3 player to each piece which played the music of the musician in the photo. 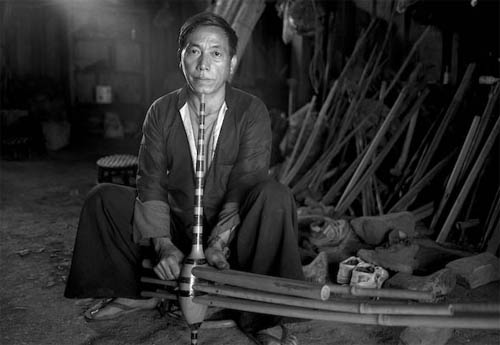 While Todd is certainly not the first photographer to do such things,  I thought it was a particularly good reminder that as we’re out shooting, it’s easy to capture other media. Our cameras can capture video. Our cell phones can record audio. It’s never been easier to add extra dimensions to photography.

The photo should always be able to stand by itself, but if you can add more context and meaning by including audio or video, there’s a great deal to be said for that. Of course, some common sense should be applied to this type of mixed media. Mp3s along with photos of musicians and their instruments adds depth to the piece. Putting mp3s of war sounds next to war photographs would, in most cases, take away from the photos.

I think for mixed media to really work, the artist/photographer needs to really understand all the media types they are working with. If that’s the case, the overall effect can be quite stunning.