In part 1 I discussed some of the habits that may or may not develop. Now I’m going to talk technology. While at the Digital Imaging conference a few technology things kept coming up… Cameraphones, the cloud, and social networks. Not exactly unexpected.

The interesting thing about cameraphones is 1) how they will evolve and affect point and shoot cameras and 2) how are users storing and managing their photos. 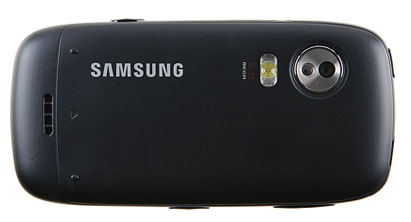 This little piece of work from Samsung not only has a 5mp camera, but shoots decent HD video as well.

As for the first point, it’s expected that camera phones will more or less replace point and shoot cameras over the next five years or so. The only standalone cameras that will be left will be the more professional DSLRs. This makes some sense. We’re already seeing a merging of functionality into smartphones. The PDA is pretty much history, despite being an important device to many people just 4 or 5 years ago (see any PDAs on palm.com?). The MP3 player may go the same way. The smaller mp3 players merge with smartphones, and the larger ones merge with gaming machines. People are leaning towards less devices, not more. Who the hell needs the headache of carrying around all those devices, power cords, batteries, etc.

As Moore’s law continues with cameras, we’ll get better optics and sensors on cameraphones until the quality is so good that, unless you need to change lenses or want RAW files, there’s no point in a separate camera. The general consensus was the point and shoot will be mostly gone in 5 years.

The other reason to suggest that this will happen is given by what people are doing with the photos they take. As mentioned in Part I of this blog post, folks are printing less, but emailing and posting photos to networking sites by the millions. The cameraphone obviously allows people to do this more seamlessly than a regular camera. There’s no need to download to yet another device to post the pictures. You can instantly send the photos to facebook, flickr, friend, family, etc. This is a huge advantage given that most photos have a short shelf-life. The value of the photo drops off rapidly, so immediacy is important. Yes, you could add a connection to the cameras (and I’m sure we’ll see that in some cameras), but I think it more likely the cameras will just get incorporated into the devices that already have a connection.

So lots of people are uploading photos to facebook and flickr. Hardly news. But do consumers really understand what they’re doing? Do they understand the ‘cloud’?

Some of the social networking sites, notably facebook, don’t keep high resolution files. They lower the resolution, so it’s not the original file that was uploaded. Some folks don’t fully understand this, nor do they understand all the implications of having their photos (hires or not) sitting around in a cloud somewhere.

So there was also a lot of discussion about getting consumers to understand their copyright/privacy rights when posting pictures to the cloud, what they should do about archiving their images, and how to manage them all wherever they are.

Many of the users posting pictures may not fully appreciate what it means to have a photo posted that may, potentially, never go away (if they even know that deleting something online doesn’t necessarily mean it’s deleted). Interestingly, the other side of the problem, archiving, is to deal with when images permanently (usually unexpectedly) go away.

There’s definitely some opportunities to provide services that deal with what users actually do vs. what they should do. A guy from SmugMug spoke at the DI conference, and they seem to know what they’re doing. Yes, users should manage their photos and know beforehand which photos are valuable, deleting ones that aren’t. In the real world, users upload everything, don’t manage them, and then two years later want to find that ‘one’ picture of granpa Joe. Further proof that human behavior is, well… wacky. But we all do it.

There’s also some opportunities that should arise from educating users about photo archiving. CD/DVDs don’t last forever (although a company called TuskerBlu claims that theirs do), cloud companies go out of business taking all their data with them (i.e. Digital Railroad), media cards die, and hard drives crash. So how to you educate folks on the need to backup their photos? It’s an important part of the digital imaging experience. Do non-techy families understand that a hard drive crash can wipe out years of photos? What can you do to make sure your customers don’t have a loss like that? It makes a good case for prints and photobooks, which last a lot longer than any of the other media mentioned.

And, of course, lastly… how do you manage all these photos with them spread all over the place? Eventually someone is going to come up with a good tagging system that will recognize everything in a photo and tag it. But that’s a ways off. In the meantime, better tools that make tagging easier are needed (along with, again, educating users why they want to tag).

So, lots of food for thought. But for other people. Because I KNOW you archive, tag, and properly manage your photos. Right?